Not Everyone is a Barista

Latte art developed independently in different countries, following the introduction of espresso and the development of microfoam. In Japan it is taken to a whole new level. 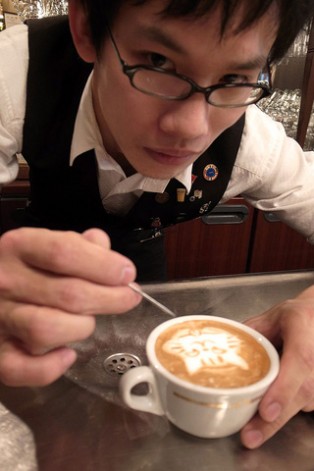 Yamamoto makes all his latte art in under four minutes

It is often said that Starbucks made the word Barista a household name. Maybe, but the word was in existence long before Starbucks became a brand-name in the 1980s. In its origin it’s Italian for bartender, but these days it is mainly if not exclusively used in combination with the art of making good espresso and all its derivatives such as cappucino, latte, macchiatto .

Now it would be easy to make this story short by saying a ‘barista’ is just a fancy word for someone who prepares coffee and operates an espresso machine in a chain coffee shop. And granted most often that would be enough to describe most baristi. However it would sadly not take into consideration that in true espresso loving countries being a barista is a career, rather than a job between high school and climbing corporate employment ladders.
Have you ever wondered in a good restaurant how some waiters and waitresses can spell you a 3 minute list of specials with all accoutrements and sauces into smallest detail, while others can merely point at the specials menu?

Just as some taxi drivers turn out ambassadors for their city with lots of historical, entertaining and business information to share, while others just want to be left alone as they take you from A to B, in many so-called menial jobs, the cream of the crop stands out with amazing clarity. And in the world of baristi (Italian plural for barista) one such example of magnificence is Kazuki Yamamoto, a Japanese barista who constructs eye-popping works of 3D art using just foam and espresso. To underline his popularity, within the six years Yamamoto has been working at a coffee shop in Osaka, he’s racked up more than 100,000 Twitter followers obsessed with his latte art.

Yamamoto says he only uses two very common objects — a spoon and a toothpick — to create all of his art. He pours the foam in first, then uses the toothpick to paint with espresso and the spoon to create shapes.

Now you may be of the opinion, why bother creating a masterpiece if it’s going to disappear down someone’s throat in just minutes? And in our fast world of driven accomplishment, you will find a lot of support for that stance. But that would also entirely deny that ephemeral art has its roots in traditional Japanese aesthetics such as the concepts of wabi-sabi and mono-no-aware, which hold that “many things are beautiful precisely because they are short lived!”
It’s the way of nature also. Butterflies, just like cherry blossoms light up nature for about 2 weeks every year and there is the emotional poignancy of knowing that it is only a temporary state of affairs.

Yamamoto must work quickly to satisfy customers’ desires for a fresh cup of delight. He claims he completes each work of art in under four minutes, so the coffee is still hot when he serves it and those who have seen him work confirm.