Surprise call for a referendum on bail out agreement in Greece may have derailed the markets on its way to an optimistic Christmas Rally. 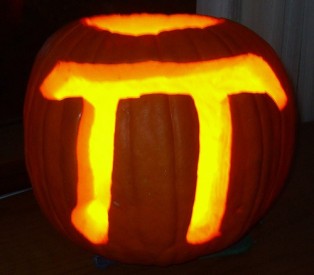 Pumpkin Pi says 3.14etc may not be what Greece wants

Greece’s Prime Minister George Papandreou’s surprise curve ball announcement to call for a referendum on Greece’s bailout, has German politicians in an uproar and may well have derailed the effort of 14 summits in 21 months, during which European leaders finally thought to have solved their sovereign debt problem. Judging by the U.S. stock market’s reaction in the past weeks, you might think the answer was yes, although the “solution” appears to be mostly another attempt to kick the can a bit further down the road.

In marathon sessions last week, European leaders agreed on a new, three-point deal to stave off a deeper debt crisis. The deal includes:

1)    A commitment by banks and other private bondholders to accept a voluntary 50% write down on Greek government debt.
2)    A boost in the lending power of the euro-zone bailout fund.
3)    A 106 billion euro ($148 billion) recapitalization of European banks.
Source: MarketWatch

Even though details were still a bit sketchy, investors threw caution to the wind and bid up stock prices. U.S. stock prices rose 3.8 percent last week and 14 percent for the month with just one trading day left, according to Bloomberg. After yesterday’s close, the DJIA ended the month of October up over 12%, which is a nice treat in spite of a tricky Halloween trading day.

With Europe’s debt crisis tempered for the moment, attention now turns to the U.S. On the positive side, the U.S. economy grew at a 2.5 percent clip in the third quarter, which was the fastest pace in a year. In addition, third-quarter earnings are still coming in strong as about 75 percent of the companies reporting so far have beaten expectations, according to Bloomberg.

Looming on the horizon, the congressional supercommittee has about one month left before making its recommendations on how to cut at least $1.2 trillion from the federal budget. If the supercommittee fails, then across the board budget cuts of a like amount would ensue.

As of last week, investors were happy to breathe a sigh of relief that Europe seems to have dodged a disaster (at least for now) and the U.S. economy still has some life.  Wall Street appears more confident that growth in the U.S., China, and other emerging markets is resuming.  As a result, commodity prices (crude oil in particular) have surged, boosting energy-related companies. Also, China’s manufacturing component rose to a six-month high of 51.7, up from 50.3 in September. This confirms China’s claim that its economy has resumed growing.

Wall Street was further encouraged as FedEx forecasted a record holiday shipping season. The delivery company expects to ship 17 million packages on their anticipated busiest day of the year, December 12th. FedEx usually ships about half this volume on a typical day. Between Thanksgiving and Christmas, FedEx forecasts it will handle 260 million shipments, fueled heavily by e-commerce.  FedEx also announced plans to hire 20,000 seasonal workers to handle the holiday crush, providing an additional sign of confidence. Last year, they hired 17,000 seasonal employees.

One more factor that excited Wall Street last week was a “merger Monday” that surprised many investors. This resurgence in “merger mania” is being fed by record amounts of cash in company coffers, thanks to record earnings and a healthy corporate bond market where capital is available at extremely attractive interest rates between 2% and 3%.

With Halloween behind us, we are officially entering holiday mode.  Can the markets look forward to an upcoming ‘Santa Claus” rally to end the year on an even higher note?
I guess a little patience to wait for the fall out from the latest Greek Tragedy, would be sound advice before making that prediction.