The panel for this once-in-a-lifetime seminar is composed of a who's who of, world championship sports car endurance racing. 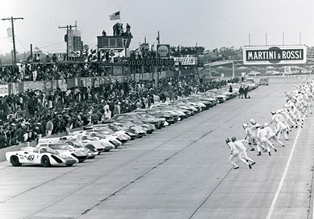 The Amelia Island Concours d’Elegance will host The Great Endurance Drivers Seminar at 10:30 AM, March 10, 2012 in the Talbot Ballroom of the Ritz-Carlton Amelia Island. The panel for this once-in-a-lifetime seminar is composed of a who’s who of, world championship sports car endurance racing.

Joe Buzzetta (USA) was one of the first Americans to race for the Porsche factory and won the Nurburgring 1000 Km for Porsche in 1967.

Vic Elford (UK) is The Amelia’s 2012 Honoree and won the Monte Carlo Rally and the 24 Hours of Daytona for Porsche in the same week. He’s won the 1000 Kilometers of the Nurburgring and the Targa Florio, raced Jim Hall’s ground breaking Chaparral 2J.

Jim Hall (USA) changed the world of sports car racing with his ground breaking Chaparrals. He raced in Formula 1 and, at Sebring in 1965, was the first to win a World Sports Car Championship race in a car he designed and built.

Hurley Haywood (USA) is a five-time winner of the Daytona 24 Hours, a three time Le Mans winner and has two wins in the 12 Hours of Sebring.

Gerard Larrousse (F) is a two-time winner of the 24 Hours of Le Mans and was Vic Elford’s co-driver winning the Targa Florio and the 12 Hours of Sebring.

Sam Posey (USA) Is a Daytona, and Le Mans veteran and, with Brian Redman, won the 12 Hours of Sebring in 1975; he won the Lime Rock Trans-Am for Carroll Shelby, has driven for Roger Penske and is the man who broke Lime Rock’s one-minute barrier. He is an author, designer and a racing commentator for American television networks.

Brian Redman (UK) is the 1981 IMSA GTP Champion and two-time winner of the 24 Hours of Daytona, the 12 Hours of Sebring plus World Championship races at the Targa Florio, Monza, the Nurburgring, Watkins Glen, Brands Hatch, Spa, Monza, the Osterreichring and Mosport. He is the three-time Formula 5000 champion.

The GREAT ENDURANCE DRIVERS SEMINAR begins at 10:30 am, Saturday, March 10, 2012 in the Talbot Ballroom of the Ritz-Carlton Amelia Island. Admission is $30.00. Purchase tickets at www.ameliaconcours.org or at the door.