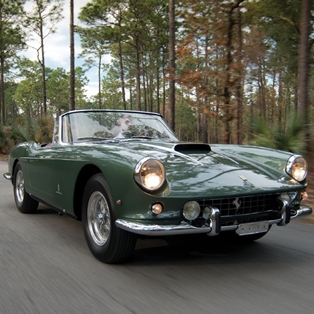 Blenheim, Ontario – Fresh on the heels of its record Arizona sale, RM Auctions, the official auction house of the Amelia Island Concours d’Elegance, announces an exceptional series of European Sports-Touring cars for its Amelia Island, Florida, sale, March 14, 2015, at the Ritz-Carlton. Headlined by one of the most valuable automobiles ever offered during the Amelia Island weekend, the sale will present a carefully curated selection of more than 90 blue-chip automobiles – a field that represents RM’s finest offering in the event’s 17-year history.

Top billing at this year’s sale goes to one of the greatest grand touring Ferraris of all time: a rare, matching-numbers 1960 Ferrari 400 Superamerica SWB Cabriolet, chassis no. 1945 SA. Powered by a potent 4.0-liter V-12 engine producing 340 bhp and sporting stunning Pininfarina coachwork, the example on offer is the third of only seven short wheelbase Superamericas built. A left-hand-drive example and fitted with open headlights, it was finished in the unique color combination of Verde Bottiglia over a Rosso Connolly leather interior – an unusual color scheme the car still wears today. Over the years, 1945 SA has passed through a string of respected collectors, including noted sports car enthusiast, Oscar Davis. Its current owner commissioned a full, no-expense-spared restoration by marque experts, resulting in an exceptional, flawless presentation and rendering the car on-the-button mechanically. It has yet to be shown following the completion of its restoration, making 1945 SA an ideal entrant for the world’s most prestigious events. Significantly, proceeds from the car’s sale will support the owner’s foundation for the education of children (Est. $6,000,000 – $7,000,000). 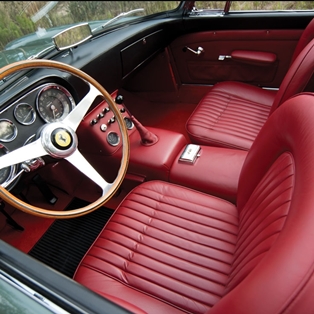 “It’s an absolute privilege to have been entrusted with the sale of 1945 SA at our upcoming Amelia Island sale. As our recent Arizona sale showed, there’s a continued strong appetite for great open-top Ferraris, and this 400 SA is certainly among the best of its breed,” says Gord Duff, Car Specialist, RM Auctions. “The true definition of sporting elegance, 1945 SA combines stunning design with high performance. Visually, it is beautiful in every respect. Its unusual and striking color combination helps distinguish it from its peers, enhancing its desirability, not to mention its various other unique details, from the chrome trim on the hood to its flush-mounted door handles. I’ve had the pleasure of driving the car and can attest it is a fantastic, turnkey driving example.” 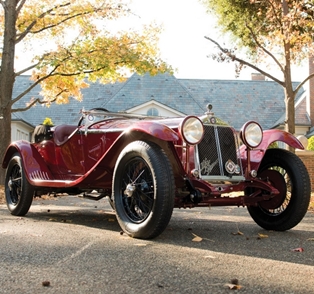 The Superamerica is joined by another superlative example of Italian design, a handsome 1931 Alfa Romeo 6C 1750 Spider, chassis no. 10814313. With stunning coachwork by Zagato, this particular Alfa Romeo is a correct, fifth-series example with matching body stampings throughout. Like the Superamerica, it also benefits from a comprehensive restoration, completed in 2009 – an exercise that left the car exceptional in every respect. Imported to the United States for first time in 2011 and exhibited the following year at Pebble Beach, its offering presents a unique opportunity to purchase a superb example one of the most important sports touring cars from the early 1930s (Est. $2,300,000 – $2,600,000). 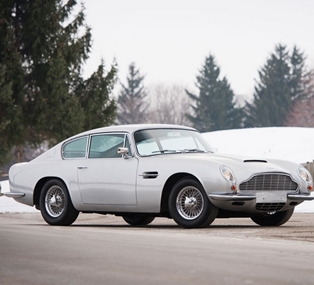 A more recent offering slated for RM’s Amelia podium is a stunning 1970 Aston Martin DB6 Mk II, chassis no DB6MK2/4214/LC. A Canadian example and one of 71 original Vantage-specification DB6s constructed, it was picked up by the original owner from the factory and was a treasured part of his collection in the Toronto area for some 45 years, during which time it was regularly exercised and carefully preserved. This highly original example, including its original interior and matching numbers drivetrain, features numerous optional accessories, including rare factory air-conditioning (Est. $650,000 – $850,000). The DB6 Mk II joins the previously announced 1971 Ferrari 365 GTB/4 “Condo Find” Daytona, chassis no. 14385, also offered fresh to the market following single Canadian ownership from new (Est. $600,000 – $750,000).

“In today’s market, vehicles boasting single ownership from new are the epitome of automotive connoisseurship,” comments Duff. “These vehicles are often purchased new by individuals for whom it is love at first sight. It’s quite easy to understand why the Aston DB6 has been treasured by its current owner for more than four decades. Combining great looks with comfort and performance, it is the ultimate iteration of the DB6 platform, checking all the boxes.”

Veiw all of this year’s cars being auctioned at the Ritz Carlton Amelia Island by visiting RMauctions.com.