Oh my, how times have changed the world!

Us children were happy to go to bed by 8:30 and no, I have never used sleeping pills when a glass of wine is within reach. 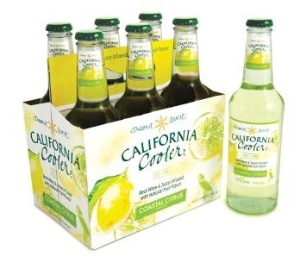 California Coolers, the ONLY wine based Coolers in the Market

This morning I read that a 30 year old mother in Fort Myers has been arrested and charged with child abuse for giving her 1 year old child a sip from a wine cooler.
The Fort Myers Police charged her for giving a child “drinks from an alcoholic beverage!!”
A wine cooler does not really qualify as an alcoholic beverage in my book, even though it says on the label that it contains some alcohol. I would have understood if they had charged the mother for the fact that a wine cooler is a poor chemical derivative of watered down wine and as such dangerous to anyone’s health, let alone a  one year old toddler.

But the irony in the story is personal and the reason why it really caught my attention, is anchored in one of my own cherished early childhood memories, the one that I like to tell when guys at parties start boasting about their capacity to tolerate alcohol. People here love to be blitzed or buzzed, rather than be a social drinker. It often strikes me as “you can only have a good time, when you’re buzzed” attitude.  In that context I would sadly have to admit that I have only been buzzed once in my life, back in the summer of 1951, and frankly the only reason why I remember is, because I was told in later years, when comprehension became part of memory.

Here is how the story goes. My dad’s soccer team had won a championship, he had scored the winning goal, and there was a huge party afterwards with lots of beer and wine. I was just over 9 months old, had an ear infection that kept me crying instead of sleeping and mom had left me with the nanny at home. At one point the nanny decided to take me over to the Clubhouse and ask my mom what to do to stop the crying. As with most babies in a group of people, I immediately became the center of attention at this party, and mom who was Francophile to the point of truly believing that a good claret cured everything, gave me what was later decided upon as about half a glass of Bordeaux.
My pain tears were gone in seconds, I was happily smiling and jabbering within minutes and I went home singing in the arms of my nanny thirty minutes later. The story went on that I slept peacefully through the night.

My mom would have ended up in jail here in this country! She would have had to face child abuse charges and potentially I would have become a Family Services (Basket) Case, and just that thought makes me wonder and fear for the direction we have chosen our society to move forward to. I am not saying that the 30 year old mother in Ft.Myers is a good mother and a responsible person. I do not know the circumstance of the arrest. But what I do know is that the mere fact of giving a one year old toddler a smidgen of wine does not hurt the toddler. On the contrary is more my experience. The French influence around our dinner table was often the perfect setting for my parents to give us a half a glass of wine before bedtime. Ritalin or other behavioral drugs given to toddlers and pre-teens these days is child abuse in my opinion.

My parents’  five sons grew up to be responsible citizens with advanced educations and successful careers; none of us ever suffered from alcoholism and to this date, and I turn 61 next weekend, I have never experienced the absurdity of being drunk, making a fool out of myself, endanger someone in traffic or the debilitating price of a hangover.

I honestly credit early familiarity with the positive effects of responsible drinking to that. And I credit my mom who kept her sanity raising 5 boys, because of her wisdom to allow us to learn about moderation, while giving herself some private time in the evenings when we were growing up. Yes we were happy to go to bed by 8-8:30 pm, and no… I have never used a sleeping pill in my life, as long as a decent glass of wine is within reach.

Oh my, how times have changed and how wine coolers have changed over the last 30 years as well. Technically there may be a legal issue developing in Ft.Myers as the ONLY wine cooler is the market these days are California Coolers. All other brands have changed their production process from wine based to malt based.

Oh yes, Life has been made quite complicated these days.