Only Two Degrees of Separation From David Sanborn

To know and admire Jazz great Dave Sanborn is like tying the music world together. He's coming to Amelia Island and I'm thrilled to pieces. 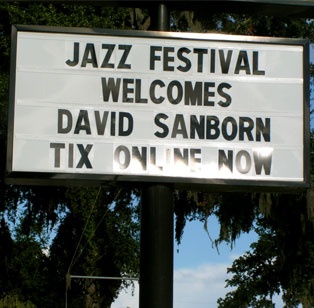 Ever since the movie “Six Degrees of Separation” came out, I have been fascinated by the game of finding out if the concept really works. The premise is that an individual is only six persons removed from knowing everyone else on the planet. For example, if you know me and I know the Queen of Holland, then you’re only one person away from knowing the queen of Holland. Yeah I know, it’s kind of silly in a weird way, but putting the entire picture together tells you something about yourself and the circles you move in and ultimately it tells you about how our life is rooted in “Who you know”, rather then “What you know.”

Freshly back on Amelia Island, I was running some errands last night, dropping off commercials we shot for the Addison House and the Williams House, and on my way back I took a quick detour to the Nassau Health Store when my eye caught the billboard in front that announces David Sanborn appearing at the upcoming Amelia Island Jazz Festival. As if struck by lightning, I stopped my wife’s little convertible in the middle of the road, grabbed my camera and took a picture of the sign. Wow, David Sanborn coming to the island, now that gets my heartbeat up.

Sanborn, who was born in Tampa in 1945, picked up the saxophone as a means to fight the negative effects of polio. It turns out that he found his calling in life much earlier than most people. Fascinated by blues and jazz Sanborn performed with blues greats Albert King and Little Milton when he was only 14 and joined the famous sixties Paul Butterfield Blues Band at age 21 for the commercially highly successful album “The Resurrection of “Pigboy Crabshaw” with Elvin Bishop on guitar.

In the eighties and early nineties he explored the many angles of jazz, TV and movie scores (L.A. Law, Lethal Weapon, Scrooged) on his own works and produced magnificent unadorned jazz with the likes of Charlie Haden, Jack DeJohnette, Bill Frisell, and Marc Ribot. In 1994 he worked closely with the Who’s front man Roger Daltrey in a Carnegie Hall sell out known as “Daltrey Sings Townshend”.

Now I know these guys from way back when in the old London days of the sixties, but by the time 1994 came along, they could have retained any sax player in the world. For them to select David Sanborn for this event, is pretty much proof of who Sanborn is. He marches among the elite of musicians. It’s a level where only the super gifted have access.

From Late Night with Letterman I know off his regular appearances with Paul Shaffer’s Band. I learned however that in 1988/89 he co-hosted Night Music on NBC with Jools Holland, the British piano virtuoso/showman, who recently exposed my good friend and blues guitar great Joe Bonamassa to a wildly excited European audience, effectively giving Joe the break he was looking for. Joe now travels the great venues of the world, including a May performance at the famous Royal Albert Hall in London where Eric Clapton joined him on stage.

Further checking into Dave Sanborn‚Äôs biography I learned that in those days of the Night Music show he teamed up with some of the finest musicians dead and alive, Miles Davis, Dizzy Gillespie, Lou Reed, Santana, Todd Rundgren, Youssou N’dour, Pere Ubu, Loudon Wainwright III, Mary Margaret O’Hara, and Curtis Mayfield are just
some names. On April 8 2007, Sanborn sat in with the Allman Brothers Band during their annual run at the Beacon Theater in New York City. Wish I had been there.

Two degrees separate me from knowing David Sanborn personally. Joe Bonamassa knows Jools Holland, and Jools Holland knows David Sanborn. Dave’s 2008 album “Here and Gone”, produced by legendary Phil Ramone featured Eric Clapton, Sam Moore and Joss Stone. I think Dave Sanborn is one of the most connected and celebrated musicians alive today. I’ll be there when Sanborn plays the Amelia Island Jazz Festival on October 10th. Not just to try and improve my degrees of separation to him, but to enjoy his music of timeless beauty. What a treat! Check him out on YouTube.