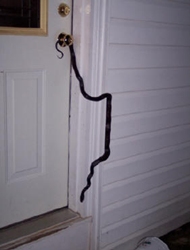 I ran across a not-so-funny story by the Associated Press describing how a woman found an eight foot snake in the laundry and it reminded me of a true childhood story.

When I was a child, my older brother had a fondness for snakes. We would play in the creeks and woods surrounding our neighborhood and he was constantly picking up the snakes. He learned to identify which ones were poisonous and which ones were not. However, I never shared this passion. He would carry them around, or contain them in a large plastic trash can. Often, he would chase me around with the snakes or he would let them loose in the house when our parents were not at home.

Our mother was hysterically afraid of snakes and I suppose, as a child, I must have inherited her fear. My brother had grown attached to a little black snake he found and decided to make it a pet, but he never told Mom. He kept the snake in an aquarium he kept in his room and I think he fed it my hamster that disappeared around the time of this event, though he never admitted to it.

For several weeks our mom was unaware of the secret pet in my brother‚Äôs bedroom. Until one day when we were at school. Mom was sorting the laundry and filling the washing machine with a load of blue jeans when my brother‚Äôs pet decided to introduce himself. Well, my mother screamed so loud that four different neighbors raced into our home fearing she was being attacked! Later, they told the police that she had let out such a blood curdling yell, they all thought some horrific and unimaginable act of violence was being committed. No violence, just a snake in the laundry.

Ophidiophobia refers to a true snake phobia. An ophidiophobic doesn‚Äôt want to see a snake alive, dead or even on TV; that would be my mother. The fear of reptiles, herpetophobia is often used when referring to describe a fear of snakes. I never grew to have her phobia, but I do have an inherent (or would that be inherited) dislike for these creatures!