Blogs, Editorial, In the News, Politics

Behind every folksy politician supposedly "bored by details", lurks a small army of value-rational and detail-oriented hatchetmen quietly cleaning up the spoils. 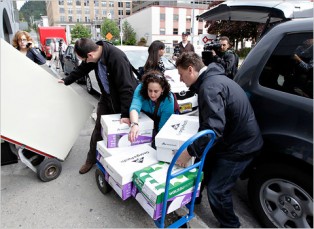 Boxes of nothing as media get frustrated over content.

I may regret giving keyword space to the Sarah Palin phenomenon but recent developments in the media made me do it. By now everyone knows that three years after numerous citizens and news organizations requested the release of Sarah Palin’s gubernatorial e-mails on an Office Yahoo account(???), the State of Alaska was finally ready to make them available last week for our scrutiny. In print. In the state capital of Juneau. With Palin cruising the country in a Superstar-like Tourbus, spouting her never-ending ignorance like she is Delphi’s Oracle, news organizations had to fly or sail to Juneau and pick up the 24,000 page disclosure in person.

The state claimed it impractical to release the original electronic versions of the e-mails, so if you wanted them you had to get there with  a guaranteed check or money order. Now the Associated Press, Washington Post, New York Times, Mother Jones, ProPublica and MSNBC each plan to turn some or all of the printouts back into searchable, easily distributed electronic data. Thanks, Alaska, for taking us back into the dark ages. Oh I know it was portrayed as a practical joke, because who in their right mind would be seriously interested a. in Sara Palin or b. in Sarah Palin’s Yahoo account used for official business(??) after 3 years of cleaning out emails.
Well, no joke really. The woman has taken center position in a lot of media ( and consequently in a lot of American households). So much even that the almighty institution called New York Times had the audacity to invite volunteers to help ‘identify interesting and newsworthy e-mails, people and events that they may want to highlight.’ And, for your easy reference, MSNBC has posted the complete collection online. Maybe The New York Times wants to buddy up with us, forgetting that Information should be free, Services are not, but I think it was a survey in a way, trying to find out how much of a cult Sarah Palin is becoming.

I’m pretty sure reading Sarah Palin’s emails would lower my IQ by a factor of ten. But while people apparently care about some moron congressman tweeting his penis and clever-dumb Sarah Palin, it once again hits me to learn that news is focusing on what is ‘important’. Because the strategy behind this unexpected release really confirms a clever masterplan, one that concerns me much more than all the folksy crap that comes out of her mouth.

You see, the problem with Palin is that a lot of people take her very seriously despite an absurd number of warning signs to the contrary.
The reason it took them 3 years to release the emails is a lot of screening out potentially damaging material. You think they’d wait 3 years, dump the emails ONLY to printed paper, redact the hell out of the content and charge people if they ‘really’ wanted to give you access? The are creating a cult, called Sarah Palin.

While I find the farce surrounding the opposing forces of Palin’s cult of personality interesting and boring at the same time, we should not let that distract us from the potential real issues at play here.   Alaska is, perhaps uniquely among American states in the present day, a state with an immensely lucrative extraction-economy, and not too much else going on. This means that there is considerable money to be made in controlling pipeline contracts and routes, security assorted extraction licenses, controlling obscure planning offices, and other tedious activity in sparsely settled areas.

Although much more scenic than most, and often less violent, this does leave Alaska open to many of the same dysfunctional political dynamics enjoyed by the poor nations who have large mineral reserves and weak governance.   It doesn’t really matter what the contents of Palin’s Office Yahoo Account tell us about who popped out a baby when. Sordid trailer-park drama? Probably, but we are all to some degree familiar if not identifiable with that.

Let’s not forget however, that behind every folksy politician supposedly “bored by details”, lurks a small army of value-rational and detail-oriented hatchetmen quietly cleaning up the spoils. Sometimes, if the local cult of personality is strong enough, they are in thrall of that politician and would heed the call from the New York Times for volunteers. In other, more sinister cases, the politician is their front (wo)man. In either case, though, their activities are the stuff that desperately needs as much sunlight (and prison cell space) as the public can devote to it.

Don’t let the personality drama get in the way. Although it maybe should, recent Presidential Elections have proven that intelligence is not a requirement for winning the Office of the President.