Today the Panama Canal continues to do the exact job it was intended nearly 100 years ago. 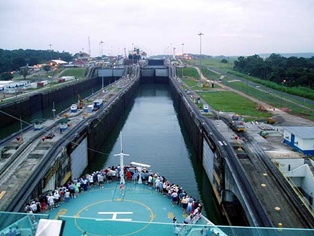 One of the most spectacular engineering feats of the 19th century was the construction of the Panama Canal nearly 100 years ago. This shipping canal connects the Caribbean Sea with the Pacific Ocean and was considered the largest and most difficult project ever undertaken. The purpose of the canal was to grant access to ships between the two oceans replacing the long and often dangerous passage south around the southern tip of South America. To put this in perspective a ship sailing from New York reroute to San Francisco via the canal will log 6000 nautical miles shaving off more than half the 14,000 miles it would have taken prior to the canals existence. The Panama Canal was originally attempted by the French in 1880, however the attempt failed including the deaths of 21,900 canal workers. With the huge benefits the canal would offer still in sight the United States took to the project and completed it in the early 1900‚Äôs. From the beginning the canal project was plagued with problems such as landslides, malaria and the dreaded yellow fever. By the time the project was completed a total of 27,500 lives were lost by both the French and American efforts.

The canal opened on August 15, 1914 on a 99 year lease to the United States granted from Colombia for the land the canal occupied. Since its opening the canal has been very popular and successful being used by private yachts to super tankers. A normal passage through the canal by a typical cargo ship takes 8-10 hours. In 2008, the canal passed 14,702 vessels through its maze of locks accounting for hundreds of millions of tons of commerce. The lock sizes were originally designed for 94‚Äô in width but the US Navy understanding the full potential of the lock requested the lock size be increased to 120‚Äô wide to accommodate Naval war ships.

The current tolls for the Panama Canal are based on a vessels type, size and the type of cargo carried. Ships carrying cargo are calculated differently from those who are empty, cruise ships are based on the number of births and private yachts are in length and gross tons. The most expensive toll ever collected for a one way passage was on May 7th, 2008 charged to the MSC Fabienne which paid $317,142.00. On the other end of the spectrum the least expensive toll was .36 cents paid by Richard Halliburton an American who swam the canal in 1928.

Today the canal continues to do the exact job it was intended nearly 100 years ago. Constant upgrades and maintenance on the lock systems are performed on a routine basis keeping this vital part of marine commerce in top working condition.