changing the structure of education 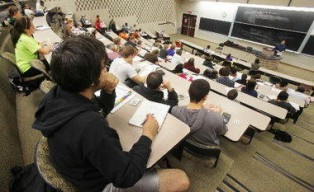 The problem is that “in our society the default assumption is that everybody has to go to college,” says Peter Thiel, who earned billions with his hi-tech investments. “Students today are taking on more debt, and recently tightened bankruptcy laws make it more difficult to shake that debt,” Paypal co-founder and early investor in Facebook Thiel says, “and those factors make higher education a risky investment. If you get this wrong, it’s actually a mistake that’s hard to undo for the rest of your life.”

Besides that he says that by the time many leave college with our without a degree, their innovative “juices” have been transformed into the ordinary and acceptable, which is one of the reasons this country is losing its edge. His Thiel Foundation announced last week that it was giving 24 people under 20 $100,000 fellowships to drop out of school for two years to start a their own companies. Now before everyone climbs onto a high horse and engage in name calling, it should be noted that Thiel’s track record is impeccable and that he is just expanding on something the Donald does on a TV show called “the Apprentice”. Yet even the almighty New York Times calls him “contrarian” and “libertarian” because he is challenging the authority of the present and the familiar.
It just underscores how afraid we are as a society to explore new ways.

In a press release the Foundation claims that the Fellows will pursue innovative scientific and technical projects, learn entrepreneurship, and begin to build the technology companies of tomorrow. During their two-year tenure, each Fellow will receive $100,000 from the Thiel Foundation as well as mentorship from the Foundation’s network of tech entrepreneurs and innovators. The project areas for this class of fellows include biotech, career development, economics and finance, education, energy, information technology, mobility, robotics, and space.”
Sounds like an innovative way to find a more balanced educational future in my opinion, something Texas billionaire Mark Cuban has been successfully experimenting with for several years now.

That education for the sake of education has been put on an unacceptable pedestal in this country, should be clear to anyone pulling their head out of the sand, and to put the value of higher education even more into perspective the Chronicle of Higher Education reports that with tuition rising and a weak job market everyone seems to be debating the value of a college degree. Anthony P. Carnevale, director of the Georgetown University Center on Education and the Workforce, says talking about the bachelor’s degree in general doesn’t make a whole lot of sense, because its financial payoff is heavily affected by what that degree is in and which college it is from. For the first time, researchers analyzed earnings based on 171 college majors and the differences are striking: For workers whose highest degree is a bachelor’s, median incomes ranged from $29,000 for counseling-psychology majors to $120,000 for petroleum-engineering majors but data (download the entire study here whatsitworth-complete ) also revealed earnings differences within groups of similar majors.

Within the category of business majors, for instance, business-economics majors had the highest median pay, $75,000 while business-hospitality management earned $50,000. The study concludes that while there is a lot of variation in earnings over a lifetime, all undergraduate majors are worth it, even taking into account the cost of college and lost earnings with the lifetime advantage ranging from $1,090,000 for Engineering majors to $241,000 for Education majors. ‘The bottom line is that getting a degree matters, but what you take matters even more,’ concludes Carnevale.

There are obviously valid points being made on both sides of the debate on higher education. Personally I would feel better about skipping a formal post-secondary education in favor of vocational and creative intuitive teaching, if high school graduates had better critical thinking skills and a deeper understanding of history. Education is not just about making money, it is also about being a knowledgeable world citizen who can spot historical revisionism and people who twist the truth.

If higher education was actually education it would be different. In the past 20 years I have seen a multitude of college graduates that were functional illiterates. Poor reading skills, non-existent math skills, and a complete lack of ability to solve problems (critical thinking). Higher education in about the dollars and sports. There are however some very brilliant young people that will get an education in spite of the system. They will make the grade with or without college. I have been giving selected college courses and symposiums at undergraduate, graduate and post-graduate level for almost 35 years. The primary skills in obtaining an education is interest and the ability to solve problems (think out side the box, and avoid social Drone-ism). Peter Thiel just made some of his money available to potentially find new ways, possibly better geared towards the future than most of what present day colleges seem to teach.