Peg Leg Pete Will Not be Replaced or Destroyed

Government, History, In the News

While there is a plan to create a David Yulee statue, the resolution does not mention replacing or destroying our beloved Pirate! 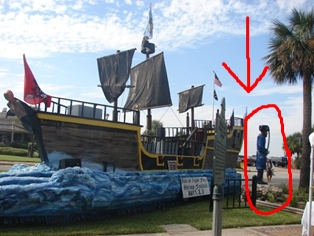 There have been some rumors floating around Fernandina Beach about the Resolution adopted by the Restoration Foundation regarding the Railroad Depot. Even the Pirates Club received an email from a concerned voice worried that Peg Leg Pete may be replaced by a new statue of David Yulee. While there is a plan to create a David Yulee statue, the resolution does not mention replacing or destroying our beloved Pirate!

I am glad this conversation has been discussed openly and I truly hope no one in the future wants to relocate Pete. Besides, there is plenty of room for both.

Take a look at one of SearchAmelia’s early articles, where I discuss the history and Rehabilitation of Peg Leg Pete headed up by the Fernandina Pirates Club.

Here is the wording of the resolution:

Whereas, Fernandina Beach’s city owned historic train depot building constructed in 1899 located at the foot of Centre Street is a daily reminder of the importance of the railroad in the development of the City and is the only physical evidence remaining of the influence of David Levy Yulee and his vision of Fernandina as a key port and rail head, and

Whereas, the Centre Street railroad depot is structurally imperiled and in need of rehabilitation at an estimated cost in excess of $250,000, and

Whereas, while David Levy Yulee was critical to the development of Fernandina and was one of Florida’s first two United States Senators there is, however, no suitable monument or statue honoring him within the City of Fernandina Beach, and

Whereas, the Amelia Island Fernandina Restoration Foundation wishes to partner in the rehabilitation of the historic depot structure and celebrate and honor the role of Senator David Levy Yulee and the railroad in establishing and developing the city we know today as Fernandina Beach

Now, therefore be it

Resolved that the Amelia Island Fernandina Restoration Foundation authorizes and directs its President to enter into discussions and agreements with the TDC/CVB to establish a partnership role in the funding and renovation and restoration of the historic Centre Street railroad depot, the establishment of an interpretative exhibit within the depot and the construction of a statue of David Levy Yulee in reasonable proximity to the railroad depot to celebrate and honor David Levy Yulee, and be it further

Resolved that upon evidence of a binding agreement by and between the TDC/CVB and the City of Fernandina Beach upon such terms that are acceptable to those parties regarding tenancy, restoration and renovation, which agreement shall also provide for the establishment of an interpretative exhibit and the construction and placement of a statue honoring David Levy Yulee, the Amelia Island Fernandina Restoration Foundation will authorize the expenditure of $50,000 for renovation and rehabilitation of the Centre Street railroad depot and the construction of a David Levy Yulee statue and the establishment of an interpretative exhibit, and be it further

Resolved that the Amelia Island Restoration Foundation upon finalization of the aforementioned binding agreement authorizes its officers to develop, together with such other not for profit organizations and individuals as may wish to participate, a fund raising campaign in support of the renovation of the Centre Street depot, the interpretive exhibit and the David Levy Yulee statue.”