We're at the end of 2011 in which for the first time in my life I was in a delivery room and saw a child being born. 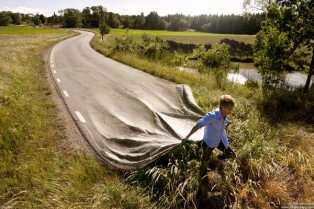 Build Your Own Road through Life

We’re at the end of another year, a year in which for the first time in my life I was in a delivery room and saw a child being born, a grandchild baby boy. He’s nine months old today and rapidly going through the initial stages of discovery of early life. Curiosity is still limited by movement, but soon he will be walking around and touching, inspecting and operating toys, gadgets, tools and appliances the world had not even thought about when I was his age. And that made me realize that by the time he is my age, the clock will have moved forward to 2070 and the world will be pretty much unrecognizable from today.

And as I’m trying to envision a glimpse of what it may look like, I have the urge to take him aside for a moment, away from his young and entirely unwritten road to the future and share with him some of my observations over a life time, in which mankind was introduced to more “high speed progress” than the human brain can handle. Just in one century we were introduced to individual motorized transportation, rapid-fire communications across the globe and into the universe, nuclear power, jet propulsion travel around the world and into space,  and scientific and medical advances that propelled mankind’s average age from 59 to 80 years and the world population from 2.5 billion to 7 billion.

By the time his young life is going to be my age, there will be more than 10 billion people on earth and the only way they will be able to co-habitate peacefully is through shared prosperity and educated respect for races and individuals. That is the daunting task  for today’s profiling generations, finding a way to share and co-habitate peacefully or face the very real prospect of extinction.

I want to share with him that life does not provide Multiple Choice options when it comes to answering its truly important questions. I would  also like to share with him that life is not linear, no matter how much society wants you to think that. Life’s not something that can be planned for on a step by step basis, in spite of educational, religious, political and corporate systems that seem to be anchored in the presumption that you can. I would tell him to carve out his own road to learning about life, because powers that have appointed themselves to be in charge of society, are too busy politicking rather than adjusting, adapting and finetuning the systems to the rapidly changing times.

I hope he will learn early on in life to accept and explore the entire world as his playground and I would tell him to not be bound to location or country, because others will try to anchor him with advice that is packaged in love and caring. I hope he will find the wisdom to know who and when to delete out of his life without remorse or apology and be guided by his dreams. I would tell him to diversify his interests and assets and never to get caught in one place with a rock against his back.

I would tell him that my parents and grandparents had studied for only one job their entire life, but that my generation and his parents stood at the beginning of multiple careers, often crossing opposite sites of the spectrum.  I would tell him to load up on talents and passions and to never give up on his dreams.
I would share with him that many people initially set out to pave their roads with good intentions, but that life is so full of unexpected encounters and curves out to compromise your beliefs, that only intellectual flexibility helps when you find yourself picking up the pieces of your life on different platforms.
I would impress on him to learn languages, appreciate cultures and build lifelong networks through the adoption of mentors; people that will guide you and teach by honest experiences gathered in a rapidly changing world.

The world is going through a rough patch, mostly as the result of designed ignorance, a misguided sense of entitlement that creates dependency and excessive greed.  The scenarios for my grandson largely depend on him building a healthy, inquisitive relationship with education that allows him to be flexible and prepared when life starts throwing curve balls his way.
I would encourage him to have faith in humanity finding the answers to today’s frictions. I have faith that the face of politics, democracy and civilization will change for the better, because of the amazing power of instant communication and interaction that has conquered the globe in the past 20 years.
I would encourage my grandson to watch youTube channels like the one called “People Are Awesome”
or TED TALKS .

And then I would repeat to him what I said before: Be decent but have the wisdom to recognize when people are projecting their fears onto your life’s decisions and have the courage to stand up for what you believe in and always face the consequences of your actions.

For us adults a new year does not start with a blank page anymore. Much of the writing on January 1, 2012 is the result of a lifetime of acting and collecting. My grandson’s young life however is as yet uncharted territory. I will encourage him to firmly grab the edges of his road and pull it to wherever he wants it to be and check with him when the year 2070 comes along.