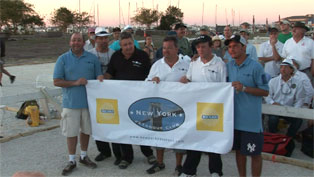 Not without a grateful nod to the beautiful weather, the first Amelia Island Pétanque America Open was a huge success. Hundreds of spectacular games gave a very appreciative Amelia Island crowd a taste of Petanque. The finals on a beautiful Sunday afternoon was a match between Xavier Thibaud’s team and Malik’s team both from The New York Pétanque Club, however after seeing the ease and accuracy of Xavier’s partner and friend, former world champion and current European shooting champion Claudy Weibel, it was no surprise that this team took top honors with a 13-3 final victory.

I will report more on the fabulous tournament, chef interviews, pictures and its annual future in Fernandina Beach tomorrow. Tonight we have to party.