Pétanque and Ricard Have a Long History

Virtual unknown on Amelia Island and the region prior to the Pétanque America tournament, Liquor and Package stores are now carrying the Ricard brand and several establishments have it in their bar line up 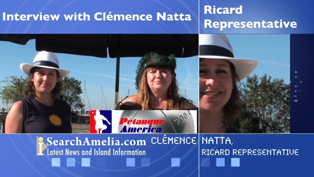 With the arrival of Pétanque in North East Florida, we also welcomed Ricard, France’s favorite long drink. For most Americans an unknown, and for others an acquired taste, Ricard was founded in 1932 by Paul Ricard. The unique taste of the liqueur is created from star anise, a rare herb from the furthermost reaches of Southern China and Vietnam, Syrian liquorice root and aromatic plants from the Provence area in France, also the birthplace of Pétanque. This original recipe – guaranteed all natural and with some accredited medicinal properties, is a closely guarded secret and has remained unchanged since its invention.

“The attraction between Ricard and Pétanque goes all the way back to the early years of the brand,” says Clémence Natta, Marketing Director USA for Ricard. The Provence area of Southern France is our home turf and the port city of Marseille is the place from where both expanded into the world.
“Pastis de Marseille” now sets the basic principle of the recipe invented and developed by Paul Ricard.”

Ricard is served as a long drink generously diluted with water. Serve a 2 cl shot of Ricard, then add 10cl to 14cl of cool water according to personal taste. Add ice only after diluting. “The ritual of drinking Ricard – picking up the carafe, adding water, and seeing the drink change colour – is the beginning of the pleasure”, says Clémence. “It reflects an art of living that combines cheerful friendliness and joy of life, like the game of Pétanque,” pointing at the game courts crowded with players from around the world and mostly wearing Ricard hats as protection against the Florida sun.

The natural attraction between the game of Pétanque and Ricard comes from the long drink qualities of the brand. “A typical game between accomplished players often lasts one to sometimes two hours”, explains Clemence, ” a time frame that often coincides with the consumption of a long drink. “The alcohol percentage on a regular mix of 1 part to 5 parts water, is only 7.5%,” Clemence says, adding with a smile, “and even better, a glass of Ricard is only 50 calories, beating light beer, wine, scotch and even champagne.”

Virtual unknown on Amelia Island and the region prior to the Pétanque America tournament, Liquor and Package stores are now carrying the Ricard brand and several establishments have it in their bar line up.
Just like Clemence pointed out, Fernandina Beach and Marseille are both port cities: they understand the worldliness of the unique taste of Ricard.

My personal take on it is this: I may not always be in the mood for the anise flavored drink Ricard, but when I play Petanque or read a book on my porch, it’s a heck of a pleasant companion.