The atmosphere of the Pétanque America Open is different than anything that is organized on Amelia Island. It's a taste of the French Riviera. 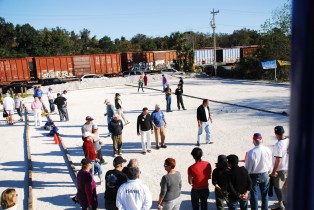 Registration Day for the 2011 Petanque America Open in Fernandina Beach

Even though it was only supposed to be registration day, several hundred competitors were already on the courts at the downtown marina on Friday.

This is now the third year that smiling faces, hugs, kisses on both cheeks and a Babylon variety of languages turns the second weekend in November into “Fernandina on the French Riviera”.

It turns out that most players and their families have already been in town for several days or are planning to stay for another week or ten day after the  Pétanque America Open tournament. Friday was set aside for registration, a number of clinics, for beginners to learn the ropes and for advanced players to marvel at what can be done with three metal balls and a little piglet.

Names are yelled across the court as yet another set of players meets up with new  and old friends they haven’t seen since last year’s tournament. This Friday afternoon is a Chamber of Commerce afternoon, with a sunset that makes everyone drop their boules for a quick photo break.

The bars are open, Ricard is flowing freely, the band of local musicians under Dan Voll’s musical direction, has started up and Philippe Boets is happy. Smiling from ear to ear he says: “Wouldn’t it be great to have this once a month on this waterfront.” I shake my head. I know Philippe and I know what it takes for him and TJ and a group of enthusiastic volunteers, to put this together.  And once again it all came beautifully together and the weather, although brisk, seems to hold nicely for the weekend. Colorful tents, strip lights, live music and games for people to have fun even though it is serious fun once the competitions starts.

After the sun set, it became almost surreal when local downtown restaurants like Kelly’s Courtyard, Lulu’s, Café Karibo, Arte’s Pizza and others started to bring in gratuitous delicious dishes for the  players and organizers. Truly, Amelia island and historic Fernandina are rapidly making friends all over the world. Friends that look forward to coming back year after year.

If you have a chance this weekend, come on down to the river front where the boat trailer parking lot has been transformed into 136 playing courts and a village of entertainment, food and bars. It’s officially Pétanque America weekend in the city (Philippe has a Proclamation to prove it). Come out and have fun and learn why this game is rapidly conquering the island and the country. And if you see our cameras, smile….because you’re going to be on video. 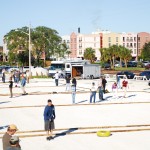 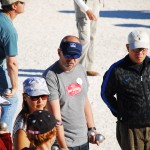 Players from around the World at 2011 Petaque Tournament Fernandina Beach 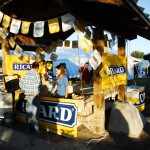