When Jeff Malone was first introduced to the game of Petanque, he found himself drawn by the camaraderie and atmosphere that dictates this French Ball game. 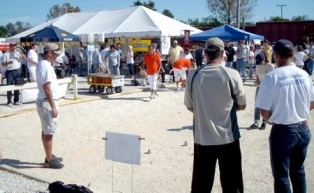 Pétanque – pronounced pet’-tonk… what’s that, I thought to myself, the first time I heard the word. After hearing several locals here on Amelia Island talk about it, I finally got a visual impression of what it was and then a friend explained that it is a French version of a game that has been played for centuries around the world aka Bocce Ball ( Italy), Horeshoes (US), Cornhole (Ohio-US),and Washers (Midwest-US), which was what I grew up playing in Southern Indiana from my back yard to camp grounds in Indiana and Kentucky State Parks. The objective of competition between players is to throw an object closer to a target than your opponent approximately 30 – 40 ft. away.

Hearing about locals playing Petanque around town at either Kafe Karibo on Wednesday nights or behind the Rec Center on Atlantic on Saturday mornings I chose to attend the latter one as Saturday mornings are usually wide open. So I decided to go and see what this was all about, but as I walked up all prepared to just watch and learn, I was instantly greeted by Philippe Boets, whom I had met at a European American Business Network meeting that two friends of mine invited me to. Not only is Phillip the owner/president of Petanque America, but this modern day Johnny Appleseed of the sport welcomed me that morning by saying Jeff take my spot and put some boules in my hands!!

I spent the next 2 hours dividing into two, three player teams and tossing softball size steel balls toward a small green plastic object about the size of a super ball, called a pig.
Growing up in a competitive family I fit right in, but just equally enjoyable was the camaraderie of meeting and conversing with people who have come to love the game and love seeing friends in the fellowship of the event. This brought back fond memories of those campgrounds I visited with my family meeting families from other parts of the country playing a similar game over 40 years ago.

If you want to tap in to this growing sport and possibly actively revisit your childhood memories, check out www.PetanqueAmerica.com or better yet visit one of the two venues and be lucky enough to hear the words “Take My Spot!”. Don’t forget that the America Open Tournament is coming to Fernandina Beach in November with 96 teams converging from all over the world and it is rumored that some of the world’s leading competitors will be here.

Jeff Malone – Director of Sales Hampton Inn at the Beach