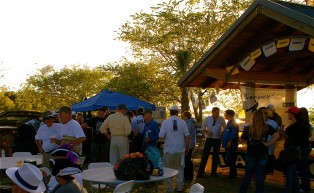 The big surprise of the very successful 2nd Petanque America Open Tournament here in Fernandina Beach last weekend was not only big, but also welcome.
Brandnew Belgian shooting world record holder, Claudy Weibel, who won the tournament last year with his New York partner Xavier, lost narrowly (13-12) in the Sweet Sixteen round, ousted by a mixed team from the Miami Petanque Club.

The Miami team in turn however got whacked in the Quarter finals that followed, by the Canadian team that ended up as runners -up after the crowd’s chants Ben, Ben, Ben… died down in a 13-6 final score.
That the final teams were very well matched may be witnessed by the fact that the sun had already gone down for about 45 minutes before the final score was announced.

By that time the Downtown Merchants bar had run out of beer, French Ricard Café had a very lively atmosphere going on, the improvised band of local musicians showed the several hundred Petanque players and their guests from around the world that they can perform in any circumstance and in front of any crowd with a musical range stretching from Django Reinhard to Creedence Clearwater Revival and a little Jimmy Hendrix to boot.

The second Petanque America tournament showed in the clearest terms possible, how much the recently passed city ordinance on serving alcohol at certain events has improved the festival’s outcome. Contained to the boat trailer parking lot near the Marina, the big tents, the little street of bars, music and at times eateries, clearly created an atmosphere that kept people on the spot.

As certain speeches during the Award Ceremony and Prize Giving confirmed, the players were very pleasantly surprised by the commitment and support the Amelia Island community and authorities have displayed for the game of Petanque. Out of the 112 teams there were almost 10 local teams represented in the competition and some of them scored impressively in this powerful field of international players.

Colson Hillier proudly stated that his team score no less than 6 points against the world champion. Collen Hodge and her husband proudly announce 2 wins before being shattered. Pete “da Meat” was playing until the darkness set in, although his score escaped me. My friend Jeff Malone played intensely and he just came into the game a couple of months ago.
As I heard this afternoon from Rae Lane at Club 14, Jeff explained it to her as: ” Once you throw that first ball, you’re sold; it’s under your skin.”

Downtown restaurateur Max Wohlfart exclaimed: ” This is THE international event of the year on this island.”

We agree, and as the word and enthusiasm spreads, French Sponsor Ricard already committed during the closing ceremonies that they will be present if next year brings the 3rd Annual Petanque America Open to Fernandina Beach and Amelia Island.

We think it is a given.