Petanque on Amelia Island in fast forward; 2nd America Open tournament this weekend attracts 80 more competitors from around the world. 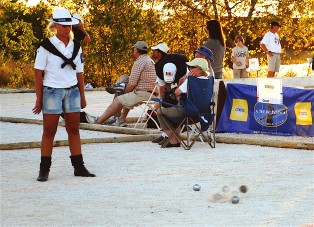 They have been coming in by the dozens if not hundreds today.
Petanque Players from Europe, the US and Canada have been flocking into Jacksonville International in anticipation of this weekend’s 2nd Pétanque America Open Tournament here in Fernandina Beach. With the city’s help and support, the courts have been expanded from 40 to 56 official courts, waiting for 112 teams to compete for top honors this year.

Much has changed since Phillipe Boets and TJ Seaton undertook the monster task of organizing an international tournament last year with a handful of volunteers.
Very few people on Amelia Island had ever hear about the French Provençial game of Pétanque, even though support was immediate and widespread.

This year is different. We have a full blown Pétanque Club with 40 to 50 regular players and even more part-timers. In one year time courts have been sprouting up all over the island in private residences, at hotels and restaurants and the city has provided permanent courts at the downtown waterfront were the tournament will take place.

We went by this afternoon to check on the progress and according to Philippe Boets, owner of Petanque America, everything is on schedule to turn out a great event.  The club members function as volunteers and have facilitated the organization of concessions, court construction, sound and power supply and so much more, to such extent that we mostly found players practicing on the courts.

French Liquor Company Ricard sent representation and some promotional tools last year, but shows a very serious promotional set up this year, while even sending down the Ricard Girls during the tournament.

Another first is that a Chicago Indie Film Producer is coming down to film the tournament for a full length movie and a documentary on the game of Pétanque.

Rather than moving 400 people across the island for the various functions and off court events, the organizer this year choose to have Award and much of the official celebrations in the big tent adjacent to the courts, leaving the players and their spouses and friends the option to get around the island and wine and dine at their choice.

The excitement is palpable and the tournament is set to start officially on Saturday morning around 9:30am.
Expect to find a little piece of the French Riviéra at Downtown Fernandina Beach’s waterfront this weekend which the city has proclaimed “Pétanque America Weekend”.

Stay tuned to Search Amelia for daily updates and news.