Pétanquers Know How To Party

Petanque on Amelia Island keeps growing by leaps and bounds, as confirmed by the fact that this year's local tournament has doubled in size. 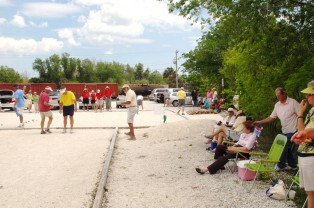 Twenty Six Teams showed up for the second local Spring Pétanque tournament at the waterfront in Downtown Fernandina Beach Sunday afternoon. Lounge chairs, tents, a barbecue grill, drinks and music and the party started under a partially clouded sky.

Instead of the usual first 13 points makes the winner game, time was the determining factor on this afternoon, which was clearly to the advantage of the experienced players who don’t need to warm up. Nobody complaint however. Smiling faces all around. Philippe Boets of Petanque America walked around his usual self, making sure everyone was having fun.

The local tournament last year attracted 14 teams and by observation, all seemed to be present as well this year, except unfortunately our SearchAmelia team, which opted out this time, missing our brother and partner Thom. As life goes on however, I was happy to see that the tournament had almost doubled and many players showed that they had not forgotten Thom.

The BBQ was manned by a Petanque playing chef from the Ritz and the goodies coming off the grill were delicious. The atmosphere and ambience feels more and more like the Provence in France on a cloudy afternoon, exactly as Philipe had envisioned when he came to Amelia Island two years ago.

Great people, much improved playing from last year and a wonderful way to close up yet another active Amelia Island weekend with the Taste of the Blues party on Main Beach and the Spring Opening of the Beach.

Here are some pictures. 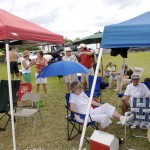 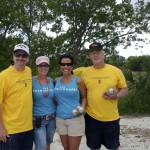 Two competing teams are all smiles 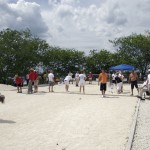 A Game that brings together young and old