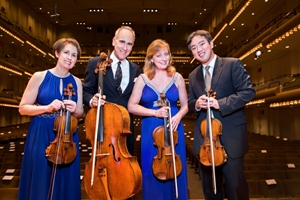 RELEASE – The Amelia Island Chamber Music Festival is presenting the second free concert of their 20th season. The New York Philharmonic String Quartet with pianist Drew Petersen will perform on Sunday, February 14, 2021, at 2 p.m. The concert will be performed at The Ritz-Carlton, Amelia Island and broadcast online at www.AICMF.com.

This free concert presentation is thanks to a generous contributor who wants to share music with the world.

The New York Philharmonic String Quartet is comprised of four Principal musicians from the Orchestra. The group, formed in January 2017, made its debut as the solo ensemble in John Adams’s Absolute Jest in New York in March 2017. All four members are multiple prize winners, have appeared as concerto soloists with the Philharmonic and orchestras around the world, and have appeared frequently in the Philharmonic’s chamber music series at David Geffen Hall and Merkin Hall.

Acclaimed young American pianist Drew Petersen is a sought-after soloist, recitalist, and chamber musician in the United States, Europe, and Asia. He’s been praised for his commanding and poetic performances of repertoire ranging from Bach to Zaimont and is the recipient of the 2018 Avery Fisher Career Grant, 2017 American Pianists Award, and the Christel DeHaan Fellow of the American Pianists Association, as well as a residency at the University of Indianapolis.

Respecting the safety of both musicians and the audience, the Festival has arranged for both live and virtual venues. Information about all concerts and tickets are available at www.AICMF.com