Pink Slime Offered to Children in our Schools

Feature, Health, In the News, Shockers

Pink slime is all over the news and apparently ammonia hydroxide is good enough to feed to our children! 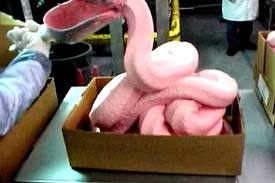 Pink slime is all over the news. Fast food companies have banned it from their oh-so-nutritious menus, but apparently it is good enough to feed to our children!

The following story is used with permission from The Tireless Agorist:

Take all the scraps and connective tissue left over from slaughtering cows. Throw it in a big vat. Grind thoroughly. Squeeze it through a thin tube and spray it with ammonia hydroxide. (Yes, the same stuff that’s in that bottle labeled “Ammonia – Do Not Drink” stored under your kitchen sink)

Sound appetizing? I didn’t think so. It’s banned in the United Kingdom. Even McDonald’s, Burger King, and Taco Bell, hardly bellweathers of culinary excellence, want nothing to do with the stuff anymore, although they have used it in the past.

It’s perfectly legal, after all. The U.S. Department of Agriculture first approved it for human consumption in 1994, and according to Beef Products Inc. more than 70% of the ground beef sold in the U.S. contains the stuff. Curiously though, a number of grocery chains, including Publix, have recently announced they do not use it, and other meat outlets are running away from it rapidly now that consumers are becoming aware of the issue.

Not the USDA, though. To the contrary, they’re doubling down, having announced plans to buy seven million pounds of it for use in the National School Lunch Program. The cynic in me says it’s because the producers are suddenly having trouble unloading it elsewhere, and the USDA is more concerned about the profits of the meat-packing industry than the people who actually consume the products they’re supposed to be assuring are safe.

Not surprisingly, both the primary producer and the USDA promise ammoniated meat scraps are perfectly safe.

Its primary producer, South Dakota-based Beef Products Inc., stands by their product and says it’s completely safe. And the U.S. government backs them up: the ammonium hydroxide compound has been vetted by the Food and Drug Administration and was allotted its “Generally Recognized As Safe” mark many years ago in 1974. “USDA would only allow products into commerce or especially into schools that we have confidence are safe,” the government agency said in a statement to The Daily in February.

My cynical side takes note of the fact that while the USDA and Beef Products Inc. are quick to throw around the “safe” word, I see no mention of “healthy” “nutritious” or “natural” anywhere in the coverage of pink slime.

This story brought to mind the story of the four-year-old and the chicken nuggets, covered quite ably at The Ponds of Happenstance.

So, apparently what went on, at the West Hoke Elementary School, is that an inspector from some State agency was busy inspecting preschool lunches brought from home and determined that at least one of them did not meet the USDA standards for a healthy lunch. A turkey and cheese sandwich, a banana, chips, and some juice. Not a healthy meal. Uh-huh. The child was instead fed processed, pressed, breaded, and fried pieces of chicken, along with some other things that she chose not to eat.

No mention was made in the story of whether the chicken nuggets contained white slime (aka meat slurry), which is the chicken version of pink slime. You can probably figure out the guess my cynical side makes.

All I can say is I sure am glad we’ve got the United States Department of Agriculture and the Department of Education protecting our children. Sure they cost us billions of dollars each year, but they’re so totally worth it. If it wasn’t for them, there’s no telling what sort of garbage the schools would be making our children eat. And who can guess what sort of garbage they’d be forced to consume from their textbooks.

After all, if it wasn’t for the Department of Education, who would teach our children about the Great Depression of 1920, statistics, the General Welfare Clause, the Perils of Paper Money, basic economics, or the Lesson of Athens, Tennessee?

…and that’s all I have to say about that.