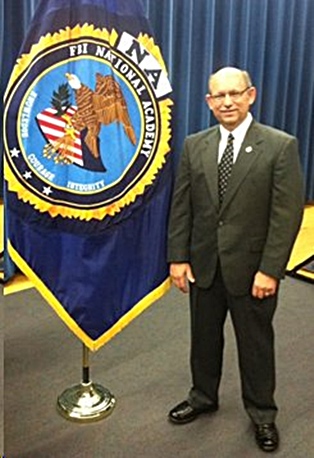 Among the two-hundred-twenty (220) law enforcement officers that graduated from the FBI National Academy Program at Quantico, Virginia on March 20th, Fernandina Beach Police Captain David Bishop became the first city officer to complete the program in more than a decade. The 259th Session of the National Academy consisted of men and women from across the United States, and also included members of law enforcement agencies from the District of Columbia, 24 international countries, six military organizations and five federal civilian organizations.

Internationally known for its academic excellence, the National Academy Program, held at the FBI Academy, offers 10 weeks of advanced operational, investigative, management, leadership and fitness training for selected officers having proven records as professionals in leadership roles within their agencies. On average, these officers have 19 years of law enforcement experience and usually return to their agencies to serve in executive-level positions.

Training for the program is provided by the FBI Academy instructional staff, Special Agents, and other staff members holding advanced degrees, many of whom are recognized internationally in their fields of expertise.

The graduating officers were represented by the class spokesperson, Joshua Lamb, Sergeant First Class with the Georgia Department of Public Safety, in Atlanta, Georgia. A total number of 48,118 graduates now represent the FBI National Academy since it began in July 1935. Of this number, approximately 16,683 are still active in law enforcement. FBI Director James Comey was the principal speaker at the ceremony.

Captain Bishop has served the City of Fernandina Beach Police Department since 1990. He was the department officer of the year in both 1993 and 2003. While at the FBI Academy he took a full educational load, in addition to the many group activities, and earned 17 college credits from the University of Virginia. He cites the many evening lectures and the powerful relationship opportunities as “impactful and beneficial,” and looks forward to applying these lessons learned to his routine duties now that he has completed this important training.