Fernandina Beach Police Captain Jim Coe retired after 16 years and was honored at an awards ceremony on January 7, 2011. 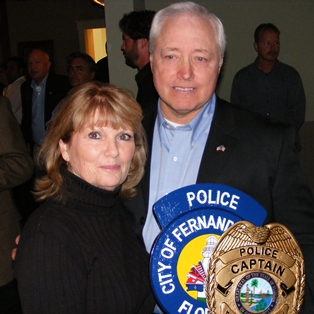 Fernandina Beach Police Captain Jim Coe retired after 16 years and was honored at an awards ceremony on January 7, 2011.

Captain Coe was born in Detroit, MI and joined the United States Marine Corp in 1968. He began his career with the Fernandina Beach Police Department in January 1995 as a Patrol Officer and was transferred to the Investigative Unit within the same year, a testament to his ability.

He was promoted to Sergeant just four years later in 1999, and to Lieutenant the same year, a rare accomplishment that again speaks to his exceptional character and desire to succeed. Chief Hurley promoted Coe to Captain in July 2006.

Jim is a graduate of the prestigious FBI National Academy in Quantico, Virginia and he has a Bachelor’s Degree in Criminal Justice and is a certified voice stress analyzer.

Coe’s dedication and service to the community include being Fernandina Beach Police Department’s Officer of the Year in 1998. He has been involved in numerous community events and fund-raisers, such as Shop with Cops. He event lent his investigative expertise and literary talents to the Nassau County Writers and Poets Society, consulting and writing a few chapters of their murder mystery novel Murder in Fernandina.

Team SearchAmelia would like to express our very best wishes for you and your future endeavors!