An early morning argument turned into a violent confrontation outside a Fernandina Beach residence as one man was stabbed and another man has been charged with 1st Degree Murder.

An early morning argument turned into a violent confrontation outside a residence at 837 Tarpon Avenue as one man stabbed and critically wounded another man during a dispute in the victim’s driveway.

Thomas Clyde Erdmann, 19 years of age, was taken to Baptist Nassau and is currently being treated at UF Health Jacksonville for multiple stab wounds.

Fernandina Beach Police and Fire Department personnel responded to the scene at approximately 3:25 A.M. this morning and located the victim inside the residence covered in blood and in great distress. Responding officers learned that the offender was known to the victim and officers provided identifying information to responding officers from our agency and the Nassau County Sheriff’s Office.

Subsequently, Nassau County deputies observed and stopped a vehicle attempting to leave the area and located a suspect inside the car. The suspect is currently in custody while this investigation continues.

Agents from the Florida Department of Law Enforcement are assisting with crime scene processing at several locations in the area.

UPDATE: The Fernandina Beach Police Department has learned that Thomas Erdmann has died after surgery at UF Health Jacksonville. Detectives have now formally charged Zachary M. Fila, 22 years of age, of Yulee, Florida with 1st Degree Murder in this case. 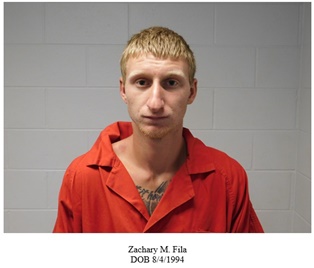