Will Post It notes really help you remember things? Only if your mind is organized, else they're just another witness to procrastination‚Ä®‚Ä® 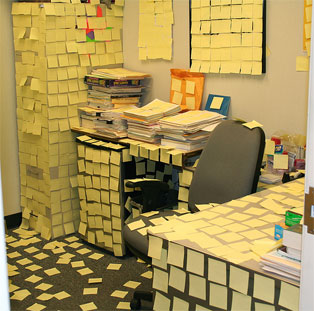 Everyone wants to get organized; the businessman, school teacher, charter boat captain and more.¬† We all come across information on a daily basis (sometimes an hourly occurrence) that we need to remember.¬† Information like recipes, an important meeting, time the kids need to be picked up and so on.¬† For those of us who don‚Äôt spend our time behind a desk or sitting in a controlled atmosphere with a pen and paper handy when critical information is passed on to you, Post It notes rarely work.¬† Even if you did use them, where do you place it so you will remember to look at it?

Yet, we all have our little tricks like writing on the back of a business card or jotting a phone number on the back side of your hand or using a voice recorder. And then there is that neat little invention known as Post-it-notes.¬† For those of you who have been living on another planet for the past 30 + years, Post-it-notes are a color visible notepad that comes in an array of sizes with an adhesive on one side, so you can stick them to just about anything.

In 1968, Dr. Spencer Silver, a scientist at 3M up in the northern United States, with the help of Jesse Kops, a fellow scientist, accidentally developed a “low-tack”, reusable pressure sensitive adhesive. For five years, Silver promoted his invention within 3M without much success. In 1974, a friend of his, Art Fry, came up with the idea of using the adhesive to secure bookmarks in his hymnbook. ¬†Fry then developed the idea of using this adhesive on stationary.¬† 3M launched the stationary product in 1977 calling it Post-it-notes, but the product failed as consumers had no idea what it was or how to use it.¬† Not to abandon the project, 12 months after the initial flop 3M gave out free samples to residents of Boise, Idaho.

People who tried the product loved it and by the early 80‚Äôs it turned into a huge success.¬† I was in grade school the first time I was introduced to this neat little invention and watched as all my teachers used them to for short notes, sticking them to a desk top or book front as reminders.¬† Everywhere I looked Post-it-notes were being used, both in the business world and at home.¬† I thought these little ‚Äústickers‚Äù were absolutely the best thing since sliced bread, that was of course until I found their evil side.

For beginners Post-it-notes are not very large, making long messages impossible or you have to double up for one message.¬† Secondly the sticking feature is good but has some limitations. For example they don‚Äôt do well in a humid environment and when it comes to using them in vehicles better think again.¬† I started using them extensively in my truck as that‚Äôs where I do the most of my cell phone calling.¬† The Post-it-notes came in very handy and easy to use, but will nonchalantly slip off whatever surface you put them on if you ride with the windows down or the air conditioner is blowing.¬† Recently on a major truck cleaning day I managed to vacuum up dozens of notes that had fallen under the seats of shuffled down into hiding places within the cab.¬† Most of these notes were several months old and of course totally forgotten about, which contradicts what the Post-it-note stands for.¬† I learned quickly that as good as these modern day note pads¬†are, they can still fall down on the job and often do.