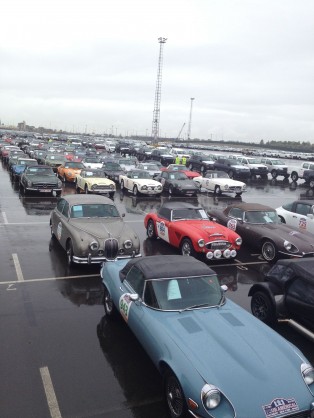 Waiting in Antwerp Harbor to get shipped to New York

Owners of Classic Cars all over the world are part of a special breed. They have “secret” signs when they meet each other on the road. They have ‘sinister’ distribution networks for long expired parts and they like to socialize a lot. In any country of the world were classic cars are appreciated this is pretty much standard behavior. And this is also the case in Belgium, a monarchy that operates inside of the European Union and even though for more than one hundred years, the Flemish north and the Walloon South have supposedly been hating each others guts on political levels, you start a Classic Car Club and members on both sides of the language barrier are friends and hoist a glass of beer or wine to each others health.

A very entrepreneurial club founded 10 years ago, named itself Touramical (Friendly Tour) put their classic jewels on the road in annual vacation like rally trips and travel as a group around Europe to have fun. Bulgaria, Barcelona, Biaritz, Greece in 2014, one or two adventure trips a year with great memories and special relationships.

In 2011 they went to Morocco and drove in caravan style from Fes to Marrakech and on to Casablanca. Earlier this year they did Zaragoza, Madrid, Zaragoza in Spain and because this year is the  Club’s 10 Year Anniversary, they decided on a USA trip north-south on the Eastern Seaboard. For the occasion the Club has renamed itself into Touramerical, which will start its road trip descent with 160 beautifully kept Classic Cars from New York on October 8 and ending in Miami 8 days later. Just imagine the logistic of shipping 160 classic cars RoRo from the port in Antwerp to Port Elizabeth Newark/New Jersey, including spare parts and manuals and back up vehicles…for the fun of it!!!!! The importation and insurance paperwork alone involved would make any normal thinking person run for the hills, but not these Belgians. They have set their mind on doing something real special for their 10 year celebration and a road trip on the Eastern Seaboard is the answer. There is one more novelty on this trip: it’s the first one for both men and women. Until now it was a “men only event”.

So what makes this rally interesting for our island?? Well, there is this Belgian guy, Philippe Boets, who came to our island almost four and a half years ago and introduced us to the French ball game of Pétanque. He set up office in June and already in November of that first year in 2009 he managed to organize a Open Tournament with players flying in from around the world. Now 4 years later that tournament is already a staple in our November activities. But Philippe Boets does much more than only promoting the game of Pétanque in America. He loves music, plays bass in the local band “Island Vibe”, ……and is always on the look-out for special promotions.

A couple of years ago he managed to divert the Millenium Carillion on a tour up north from Naples, to take a detour and treat us to a Bell Concert on the Riverfront. And now this year he managed to convince the Touramerical organization to detour and make a stop on Centre Street in Downtown Fernandina Beach on three consecutive days- October 13,14 and 15- and enjoy our shores and hospitality for a couple of hours, before moseying down to Daytona Beach.

You can read everything Touramerical on their website and Like them on Facebook and make a note in your agenda to come see these beautiful classic vehicles as they wind down on their adventure rally from New York to Miami. 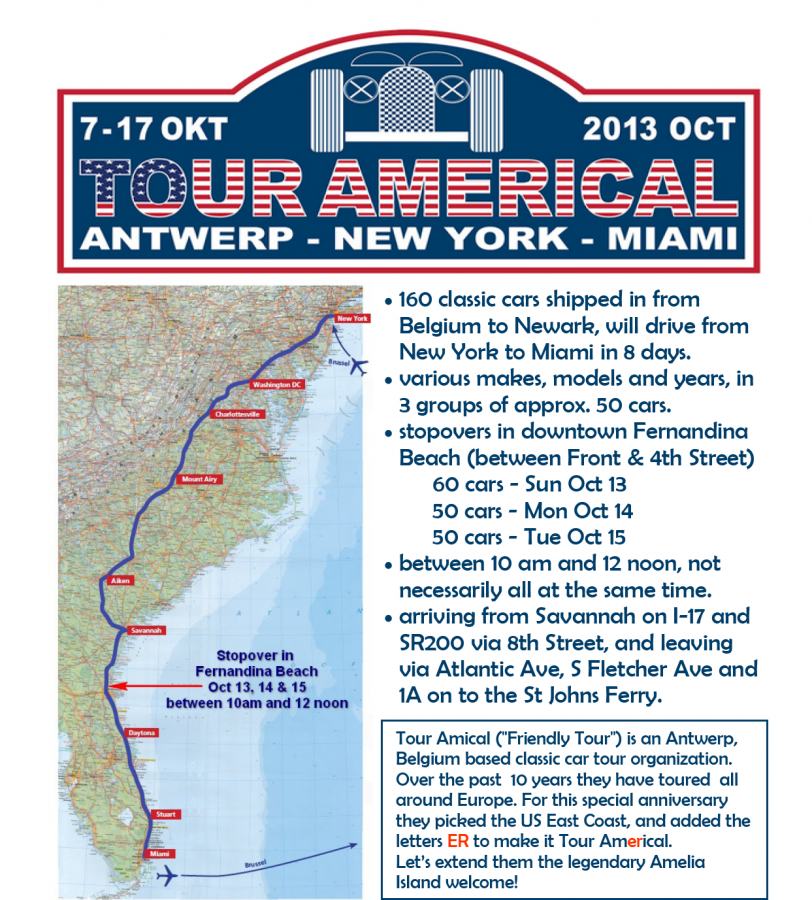