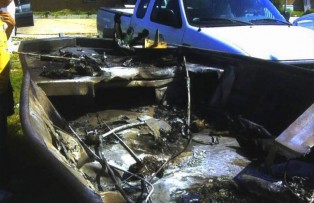 This happens every year. Be prepared.

While we are desperately looking for monsoon like rains here in NorthEast Florida and South Georgia, if only to stop the ongoing forest fires and the nasty, unhealthy smoke, we unfortunately also have to deal with the possibility that lightning, which usually comes with these rains, will set off more fires. With an average of 1.4 million cloud-to-ground lightning strikes each year, most of them from the Tampa-Orlando Axis North, no other state in the country experiences more lightning strikes than Florida. Lightning is potentially very dangerous and can travel as far as 10 miles from a thunderstorm cell! So while it may not be raining at your location, lightning can still reach you. The key to remaining safe from a lightning strike is to keep an eye to the sky and watch for darkening skies on the horizon along with distant rumbles of thunder.

Amelia Island being a waterfront boating community, we have to realize that the vast majority of lightning injuries and deaths on boats occur on small boats without cabins. Before going out on a boat, it is crucial to listen to the weather. If thunderstorms are in the forecast, don’t go out. If you are out on the water and skies are threatening, get back to land and find a safe building or safe vehicle. If you’re too far out, try to find a fellow boater with a cabin, tie off with enough line and hide for the duration of the storm.  If there is no boat in the vicinity and weather is bearing down on you, put on your lifejacket if you aren’t already wearing one.
Boats with cabins offer a safer, but not perfect, environment. Safety is increased further if the boat has a properly installed lightning protection system. If you are inside the cabin, stay away from metal and all electrical components. ALSO STAY OFF THE RADIO UNLESS IT IS AN EMERGENCY and then make it short!
If you are caught in a thunderstorm on a small boat, drop anchor and get as low as possible. Large boats with cabins, especially those with lightning protection systems properly installed, or metal marine vessels are relatively safe.

And while we’re covering the potential weather threats. Waterspouts liken tornadoes over water, but scientific work over the last 30 or so years has led to a more complicated picture with waterspouts differing in some ways from tornadoes over land, especially large ones. Waterspouts and all the different kinds of tornadoes have a similar basic structure with air moving upward. At the ground or ocean surface, winds are rushing faster and faster as they swirl into the vortex and then upward. Often with both tornadoes and waterspouts, the vortex is seen coming down from the cloud, but not obviously touching the ground or ocean. Such vortices, that don’t seem to touch the surface, are called “funnels” or “funnel clouds.”
Before you go boating, get a marine weather forecast. The National Weather Service issues marine broadcasts when thunderstorms are in an area, which includes a waterspout watch or warning. Boaters should never go out when thunderstorm conditions exist because of the dangers of wind, lightning and waterspouts. While you are boating, listen to NOAA Weather Radio which will provide the most current weather warnings. If you are already out and hear a warning or see black clouds piling up, head to port or safe shelter as quickly as possible
If you do get caught in a storm, or otherwise spot a waterspout, try to get away from it by driving your boat at right angles to it. Then, try to protect yourself from any flying debris, which tends to do the most damage. Waterspouts occur more frequently in the Florida Keys than anywhere in the world. Waters around the Keys, especially from Marathon past Key West on westward to the Dry Tortugas, probably see 400 or 500 waterspouts a year. Since they are so common, most go unreported unless they cause damage. In our Northeast Florida area waterspouts are less common, but they do occur.

As do Hurricane and Tropical storm conditions. If tropical storm conditions are in the forecast you should heed the following advice.
Any boat in the water should be secured in a snug harbor (don’t even think about riding out the storm at sea unless you’re the skipper of an aircraft carrier or tanker). The trick is deciding which harbors (hurricane holes) will still be snug if a hurricane comes ashore and which harbors will be vulnerable. Storm surges and high water are major considerations. A storm surge of 10ft or more is common in a hurricane, so a seawall or sandy spit that normally protects a harbor may not offer any protection in a hurricane. Crowded, rock strewn harbors are picturesque, but they may not be the best place to keep your boat in a storm. Rocks are hard on boats, should yours break loose, and in a crowded harbor the chance of another boat breaking loose and banging into your boat is that much greater. Finally, what is the bottom of the harbor like? If you plan to anchor, check your charts to see how much water your boat will be anchored in. The best anchoring is usually in sand, followed by clay, hard mud, shells, broken shells, and soft mud. Also, water can sometimes be blown out of the harbor, leaving boats stranded briefly. If this happens, your boat would rather settle onto anything but rocks. Down in the Caribbean Islands many smart boat owners opt to strand their yachts onto secluded beaches in the sand which double 6 foot long sand anchors in place, as they figure the nuisance of pulling their yacht back off the beach after the storm has passed, is preferable over having it destroyed and/or capsized, mostly by other boats coming off their anchorage.
Smart boaters also remove any expensive (communication/navigation) equipment off the vessel and store it somewhere on land.
Have a fun-filled and safe boating season.