Fernandina Beach Police located a capsized boat, The Problem Child, in the surf about one-hundred yards from shore. 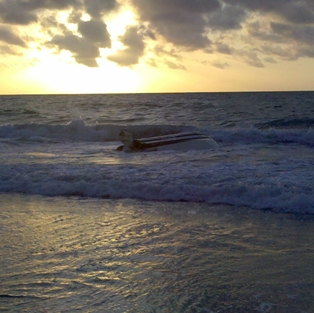 The Fernandina Beach Police Department responded to a call about the smell of gas and located a capsized boat in the surf about one-hundred yards from shore.

The 20 foot boat, The Problem Child, had been drifting toward Amelia Island after capsizing off the coast of Mayport, Florida on May 16 in rough weather.

According to the Coast Guard, the boat left John and Elia Nevarez and their friend Rebecca Sullivan in the Atlantic Ocean where they floated for two days before being rescued from the sea near Brunswick, Georgia. 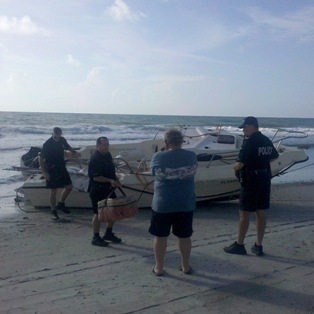 The boat hit the surf near 9th and Ocean Avenue on the north end of Fernandina Beach on Amelia Island at about 2:00 AM on Sunday morning.

Officers responded and searched the area after receiving a call from a resident about a possible gas leak.

After searching the beach the officer found the boat capsized in the surf about 100 yards out. They checked the boat and got the registration numbers. 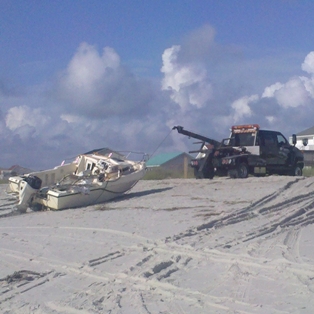 Bill’s Towing was called and the boat was turned upright and removed from the surf.

“Nine of ten drowning victims may have survived a capsizing or fall overboard if they had been wearing a life jacket.” According to About.com’s Powerboating category. “By wearing a life jacket while boating, you increase the chances of surviving exponentially. Think of it another way: without a lifejacket, how long can you tread water while waiting for rescue?

What if you were injured?”

Our first of nine Boater Darwin Awards as compiled by SafeBoater.com was about a man who lost his life because he was not wearing a life jacket.