The importance of self-promotion cannot be underestimated when your goal is career success. 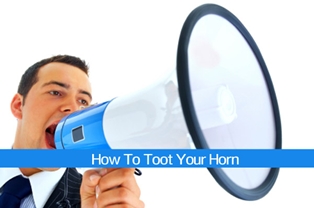 Whether you are looking for a new job, a new direction for your career, or to be recognized as a subject matter expert, you need to promote yourself.

The government offered fresh data this month showing that the job market is gradually improving, but there still aren’t enough jobs to go around. To set yourself apart from the many other applicants, you must not only be the best at what you do, but you must also engage in self-promotion so that potential employers will recognize your strengths, interests, experience, and expertise.

Self promotion includes the things you say or do to make people notice you and become aware of your abilities and value. Think about self promotion as if you were a new product coming to market with no promotion in the mass media. Since no one knows about this new product, it disappears from the market. Failure to promote the product resulted in its failure. The importance of self-promotion is brought home when you consider that 55-80 percent of all jobs are filled through social connections, not “help wanted” advertisements.

Fortunately, social media on the internet is a simple and free resource you can use for self-promotion. You can make contacts, build your reputation, and even be seen as a subject matter expert in your particular area of expertise in a relatively short time. The sheer magnitude of the numbers of people using social media demonstrates its importance. Consider the “top three”:

Facebook – With more than 500 million users, Facebook is now used by 1 in every 13 people on earth, with more than 250 million logging in every day. Nearly 72 percent of all US internet users are on Facebook.
Twitter – Twitter recently announce it has over 100 million active users worldwide. Twitter also revealed that is now processing 230 million tweets a day, a number that has increased 110% since the start of 2011.
LinkedIn – LinkedIn operates the world’s largest professional network on the internet with more than 120 million members in more than 200 countries and territories. Professionals are joining LinkedIn at a rate faster than two new members per second. There were nearly 2 billion people searches on LinkedIn in 2010.

Facebook, Twitter and LinkedIn have proven to be viable avenues for making contacts and connections that are vital to career success. In addition to these sites, you may choose to create your own blog or comment on blogs maintained by others, and participate in forums. Rather than jumping into every social media option at once, think about your goals and evaluate the various social media sites. Make your selection based upon what works best for you. For instance, if you are seeking employment, then you will want to start with LinkedIn so that your professional profile will be found by other professionals who may be searching for someone with just your talents.

Twitter is a microblogging site where posts are limited to 140 characters. There are many reasons to use Twitter. You can locate people, as quick questions and receive answers in an instant, learn about new trends in the industry, find articles posted on others’ blogs, and more.

Facebook is by far the most “fun” of the three. It is great for meeting people, tracing people from your past, playing games, and posting pictures.

The first secret to self-promotion is that what you do is not actually about you, but about the people with whom you are communicating. You may think this is opposite to your goal, but it is not. Your purpose for participating in social media is to attract followers, friends, and connections. You do that by being interested in, and helping, other people.

In addition, be personal and demonstrate that you are human. Post photos of yourself to show your personality, but not photos of you drinking, partying “hearty”, or doing something that would make your mother blush. You want your online story to promote your best attributes. Remember that future employers are searching social networking sites for information before they make a hiring decision.

The importance of self-promotion cannot be underestimated when your goal is career success. Social media sites are a perfect avenue for self-promotion and there is no denying they are now a major part of our lives. If you have not already done so, it is time to explore social media to learn what it can do for your future. Get out there and promote yourself!