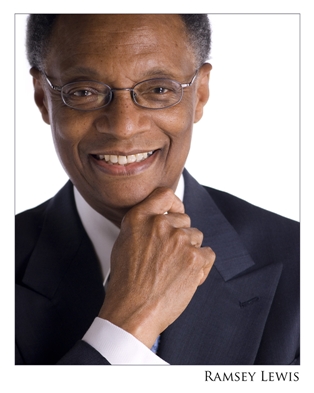 The festival will present “An Evening With The Ramsey Lewis Trio” on Saturday, October 9. Spurred by the success of 2009 AIJF concerts with David Sanborn, the booking represents an ongoing effort by the festival to bring in critically acclaimed and commercial musical acts. With three Grammy Awards and seven gold records to his credit, Lewis stands out as one of the most popular jazz musicians of all time.

A native Chicagoan, the venerable Concord Records artist has released dozens of well received jazz albums through the years and is noted for such 1960’s hits as “The In Crowd,” “Hang On Sloopy,” and “Wade In The Water.” “We are thrilled to have Ramsey this year,” said DeMerle, the festival’s Artistic Director. “He is a wonderful pianist who, along with his trio, will provide a terrific evening of first class jazz for our event.” Lewis will be accompanied by veteran sidemen Larry Gray (bass) and Leon Joyce (drums).

In addition to his recording activity, Lewis has co-produced a 13 part television series, “Legends Of Jazz With Ramsey Lewis.” Beginning in 2005, he began seriously composing large-scale musical works, including an eight-movement composition, “To Know Her,” in collaboration with the Joffrey Ballet and Donald Byrd. His latest album, “Songs From The Heart: Ramsey Plays Ramsey” was released in September 2009, by Concord Records.

DeMerle said that more festival artists, venues, and ticket information will be announced in the coming months. “We’re planning a packed schedule that showcases a variety of jazz formats,” he added.