I was intrigued by her explanation of this raw meat diet or BARF (Biologically Appropriate Raw Food or Bones and Raw Food) for my pets. 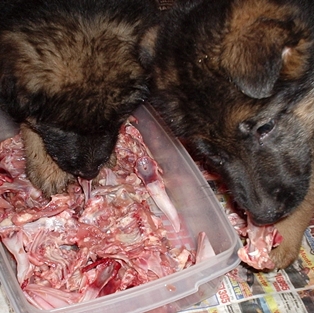 Visiting with my mother and her Boston Terrorists for the holidays, I learned about a raw meat diet for dogs from my step-brother‚Äôs wife, who also has Boston Terriers. One of the dogs, Snoopy, was quite a handful for my mother and so he went to stay with them while Mom was recovering from surgery. Seeing Lee Lou and Snoopy, and the difference in appearance between mom‚Äôs two dogs, Sassy and Skippy, I was intrigued by Brandy‚Äôs explanation of this raw meat diet or BARF (Biologically Appropriate Raw Food or Bones and Raw Food) and I wanted to learn more.

Raw meat including the bones found in meats such as chicken, turkey, lamb and elk are similar to what dogs would eat naturally if left in the wild. Concerned about the terrifying tales we have all heard about dogs and chicken bones, Brandy told me that raw bones, the non-load bearing bones, such as ribs and necks will not splinter and get stuck in their throats.

I found this website to contain an abundance of information and links to other sites. The arguments for and against are as controversial as politics, global warming and conspiracy theories, and anything in abundance is unhealthy, right? Drinking to excess, overeating and even sex, okay, maybe not sex unless it is an addiction, can all be detrimental to your physical and psychological well-being, and so it is with all life forms. Seriously though, when humans diet properly, the best advice is to eat more natural foods and in proper proportions. So shouldn‚Äôt the same reasoning apply to your four legged friends?

Commercial pet foods contain additives and preservatives to keep the food fresh and smelling palatable. Vaccines and toxins found in flea and tick repellents all add to the potential for your pet to have allergic reactions to any or all of these supplemental ingredients or treatments. This makes sense to me since commercial pet food has only been around for a few decades. There has been much written about pet allergies and they all point at these culprits. 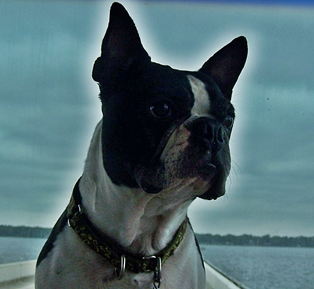 The most obvious changes I noticed in these Bostons, was in their coats. The dogs on the raw meat diet had shinier, softer and denser fur. At one point all four of them were corralled in the living room. The two on the raw meat were chewing on dog toys; the other two dogs were chewing on themselves. Wow! That was truly an ‚Äúah-ha‚Äù moment as one well-know celebrity would describe it had she also been in the room.

When I bathed Sassy and Skippy, their fur was thin and Skippy has always been able to clear a room when he passes gas. Flatulence is no longer an issue with Snoopy now that he is on the raw meat diet.

Whether you feed your dog raw meat diet or a commercial brand of dog food, make sure your dog is receiving healthy fatty acids and a minimum of grains. Personally, I have two dogs, much larger than the Boston and with the cost of meat at the local grocery stores I‚Äôm not sure I can afford a complete raw meat diet for my girls, but I will start with a few chicken necks and see if it reduces some of their itching and Trixie‚Äôs hot spot she sometimes gets on her tail. Take everything in moderation, right? I‚Äôll let you know how it works out!