Nassau County has beaches, golf courses, tennis facilities, boating access and parks that provide us with recreation and open space. 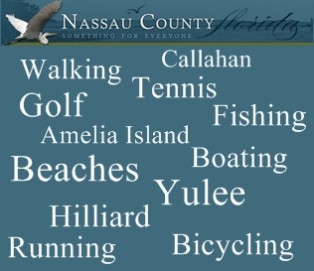 Nassau County and Amelia Island have wonderful beaches, golf courses, tennis facilities, boating access, and parks that provide us with recreation and open space. At Main Beach in Fernandina Beach a skate park and basketball court have also recently been added.

In 2005 I met with the state, county, and city park & recreation directors for Amelia Island parks to determine what they felt would be the best improvement we could make to our Recreation and Open space to improve our quality of life here. They unanimously recommended that the best improvement to the parks would be to link them to each other with a multi-use trail that could be used for walking, running or bicycling.

This local idea for a trail was later confirmed by state and national information:

1. The most frequent request by visitors to Florida’s Official Welcome Centers is information about where is there a good place to bicycle safely.
2. The National Association of Homebuilders found prospective home buyers consider trails to be the most important amenity in an area.
3. The number of Americans who ride bicycles is greater than all those who golf and play tennis combined.
4. 52% of Americans would like to bike more and 46% would like to bike to work if possible.

Coincidentally, the East Coast Greenway was encouraging development of a trail system, spanning nearly 3,000 miles, as it winds its way, between Maine and Key West, Florida, linking all the major cities of the eastern seaboard. Over 25 percent of the route is already on safe, traffic-free paths. Being on the east coast, the Amelia Island Trail (AIT) could not only connect our island parks but also become an important link in that 3,000 mile East Coast Greenway trail.

Multi-use trails, such as those that are part of the ECG, are an integral part of local transportation systems, provide recreational outlets for all age groups, help promote healthier lifestyles, and promote local economic development. The East Coast Greenway is becoming the backbone of an emerging network of trails along the east coast that can contribute to:

Amelia Island competes with hundreds of other coastal towns along the Florida coasts (East and West) for tourists and new home buyers. When it comes to recreation quality many of these other shore towns have similar beaches, golf, and tennis facilities, but many also offer warmer weather to use them in. By adding a great trail network (for walking, running and bicycling) which is part of the East Coast Greenway, Amelia Island can offer a competitive advantage for active people, who might also enjoy a bit cooler weather.

In this very competitive economy, a great trail network and a bicycle friendly community could become a competitive advantage for Amelia Island, while significantly improving the recreation quality of life for all residents in Nassau County.