While 80% of the population has given their tax filing to H&R Block and its derivatives, politicians still want to score votes with tax lies. 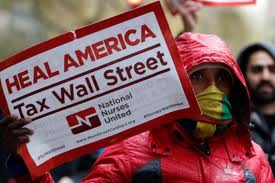 And everyone has an opinion, mostly without an educated guess

As Tax season is in full swing and the 1099’s are criss-crossing the United States, in a last ditch attempt to safe the Postmaster General, there are a couple of political tax observations, that are falsely projected as economic stimulants.
Most people these days have given up on being tax savvy and just take up mainstream opinions as economic fact. In public they express the opinion that good citizenry is happy to pay taxes and in private discussions they hate the government’s guts to forcefully collect taxes.
Although I am staunch libertarian, I do not support the idea that mankind can naturally and spontaneously form a balanced well-behaving society without a leadership setting the basic standards of co-habitation. If you like you can call these standards rules and regulations, or even laws to abide by. I’d call them respect and decency.

And because of the potential of conflict that comes natural to the human animal, some form of taxation and collection authority will be necessary, even if only to hire some people to reinforce the accepted values.  If you don’t want to get into the same pickle as the Eurozone, where they “forgot” to give the Euro Parliament the power to tax its member states and citizens, you need more than just market forces to guide humanity into a responsible future.

I was not going to make this a long essay, especially since taxation, even though very young in the eyes of history, has grown in the last hundred year beyond our comprehension. The plethora of taxes we pay today is never ending, and it all began by “the need to finance wars”.
If you are interested in one of the more blood pressure raising chapters of our history you may want to start with Investopedia’s Income Tax 101 (http://www.investopedia.com/articles/tax/10/history-taxes.asp#axzz1o9CN1xJM)

Today I’m only going to discuss the ridicule of the argument that reduction in Corporate Taxes would Inevitably lead to Job Growth. Not true and here is why not!

The main argument for lowering the corporate tax rate is that it supposedly will stimulate hiring, and, thereby, drive economic growth. That’s what politicians and some economists want you to accept. Well, the corporate tax burden on average in 2011 was 12.1% of profits, the ABSOLUTE LOWEST since 1972, in 40 years!!!  Yet officially sanctioned  Bureau of Labor Statistics unemployment figures still stand at just over 8% (as of January 2012), so clearly the low corporate taxes are not having an impact on jobless rates.  One possible reason for this, some suggest, is that the largest corporations in the country are accelerating the outsourcing of jobs to other countries, especially in the manufacturing, technology and customer service areas. This expatriation of tax savings does nothing to stimulate the American economy. There is truth in that and I already wrote recently about the $1.5 trillion these large corporation are keeping in offshore bank accounts. Yet, pointing an accusing finger at the corporate bad boys is useless and idiotic. The world is now their marketplace and with the same capitalistic principles that they outgrew this country’s marketplace, they are now conquering the world. They  are not really going to get concerned about politicians in Washington trying to muzzle them, because they have options and alternatives. 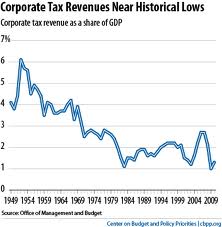 Lowest Corporate Tax Rate in 40 years has not stimulated the economy much in recent years.

Another reason why our domestic economy is still sputtering as it moves forward is that America is not as entrepreneurial anymore as it once was. Small businesses used to employ the majority of American workers. But when it became more attractive for college graduates to get government jobs with more security, equal or higher pay than in the corporate world and more health care, more entitlements and power, the urge and passion to build a business ebbed away, except for a small group of hi-tech company, which per definition can operate from anywhere in the world.

Bottomline, America’s educated talent doesn’t go into business for themselves anymore. They take a cushy job with fringe benefits and entitlements and watch sports and party. And I can’t really blame them because being bright and talented as they are, they recognized that opposite to almost all of the rest of world, Passive Income in the US is Taxed at a Lower Rate than Earned Income.

Again politically I am against big government and I’m squarely against double or triple dipping by the government, but if you need to raise funds to pay for some societal essentials and jumpstart economic activity, then you may want to put a higher burden on dormant capital than on earned income. I know, not a popular thought with the Amelia Island Citizenry where most wealth is concentrated in investment income. But the logical economic thought is that when taxes on investment income are higher than taxes on earned income, investors will more easily turn to stimulate inputs into the economy (labor). In the U.S. however, just the opposite is the case. In the higher tax brackets, parking money in investments attracts less tax than employing it directly into the economy. And all the back and forth talk about reducing tax rates across the board will not change this marketplace dynamic.