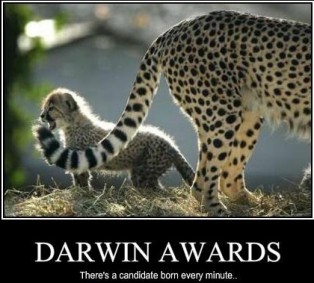 It has been four years since we reported on the Darwin Awards, not because the human race has become smarter, but because on a daily basis we get bombarded by so many voluntary acts of stupidity all around us, that we barely have enough time to shake our heads in disbelief. And besides that, we always have America’s Funniest Home Videos as a barometer of growing stupidity. For those who are unfamiliar, the Darwin Awards “salute the improvement of the human genome by honoring those who accidentally remove themselves from it.”  Beware however, there needs to be a certain level of creativity involved to qualify and the Darwin Awards Moderators have been raising the bar of late. Any shooting death too common does no longer qualify  Now there is a fine precision technique when selecting candidates for this prestigious award, which is why I love the following example from the Arkansas Democrat Gazette, that did not even result in death:

Two local men were injured when their pickup truck left the road and struck a tree near Cotton Patch [Arkansas] on State Highway 38 early Monday. Woodruff County Deputy Dovey Snyder reported the accident shortly after midnight Monday. Thurston Poole, 33, of Des Arc, and Billy Ray Wallis, 38, of Little Rock, were returning to Des Arc after a frog-catching trip. In an overcast night, Poole’s pickup truck headlights malfunctioned.
The two men concluded that the headlight fuse on the older-model truck had burned out. As a replacement fuse was not immediately available, Wallis noticed that the .22 caliber bullet from his pistol fit perfectly into the fuse box next to the steering-wheel column. Upon inserting the bullet, the headlights again began to operate properly, and the two men proceeded toward the White River Bridge.

After traveling approximately 20 miles, and just before crossing the river, the bullet apparently overheated, discharged, and struck Poole in the testicles. The vehicle swerved sharply right, exited the pavement, and struck a tree. Poole suffered only minor cuts and abrasions from the accident but will require extensive surgery to repair the damage to his testicles, which will never again operate as intended!

Wallis sustained a broken clavicle and was treated and released. “Thank God we weren’t on that bridge when Thurston shot his balls off, or we might be dead,” stated Wallis.
“I’ve been a trooper for 10 years in this part of the world, but this is a first for me. I can’t believe that those two would admit how this accident happened,” said Snyder.
Though Poole and Wallis did not die as a result of their misadventure as normally required by Darwin Award official rules, it can be argued that Poole did in fact effectively remove himself from the gene pool.

Priceless in my opinion, especially the various names that add magnificently to the story. Imagine Thurston, Billy Ray, Dovey all concentrated in a location called Cotton Patch. Can’t make that up. But one thing’s for sure: 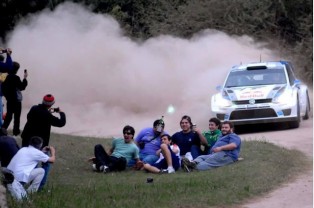 “Life is hard. And it’s harder when you’re stupid.”

Well here are some other runners up who all paid the ultimate price for being stupid, (removal from the gene pool) which makes their departing stories even more alluring.

Nominee No. 1: [San Jose Mercury News]:
An unidentified man, using a shotgun like a club to break a former girlfriend’s windshield, accidentally shot himself to death when the gun discharged, blowing a hole in his gut.

Nominee No. 2: [Kalamazoo Gazette]:
James Burns, 34, (a mechanic) of Alamo, MI, was killed in March as he was trying to repair what police describe as a “farm-type truck.” Burns got a friend to drive the truck on a highway while Burns hung underneath, so that he could ascertain the source of a troubling noise. Burns’ clothes caught on something, however, and the other man found Burns “wrapped in the drive shaft.”

Nominee No. 3: [Hickory Daily Record]:
Ken Charles Barger, 47, accidentally shot himself to death in December in Newton, NC. Awakening to the sound of a ringing telephone beside his bed, he reached for the phone but grabbed instead a Smith & Wesson .38 Special, which discharged when he drew it to his ear.

Nominee No. 4: [UPI, Toronto]:
Police said a lawyer demonstrating the safety of windows in a downtown Toronto skyscraper crashed through a pane with his shoulder and plunged 24 floors to his death. A police spokesman said Garry Hoy, 39, fell into the courtyard of the Toronto Dominion Bank Tower early Friday evening as he was explaining the strength of the building’s windows to visiting law students. Hoy had previously conducted demonstrations of window strength, according to police reports. Peter Lawson, managing partner of the firm Holden Day Wilson, told the Toronto Sun newspaper that Hoy was “one of the best and brightest” members of the 200-man association. 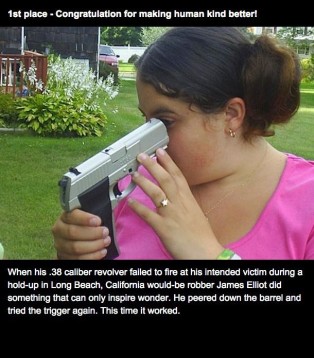 Nominee No. 5: [News of the Weird]:
Michael Anderson Godwin had spent several years awaiting South Carolina’s electric chair on a murder conviction before having his sentence reduced to life in prison. While sitting on a metal toilet in his cell, attempting to fix his small TV set, he bit into a wire and was electrocuted.

Nominee No. 6: [The Indianapolis Star]:
A Dunkirk, Indiana, man, using a cigarette lighter to check the barrel of a muzzleloader, was killed Monday night when the weapon discharged in his face, sheriff’s investigators said. Gregory David Pryor, 19, died in his parents’ rural Dunkirk home at about 11:30 p.m. Investigators said Pryor was cleaning a .54 caliber muzzleloader that had not been firing properly. He was using the lighter to look into the barrel when the gunpowder ignited.

Nominee No. 7: [Reuters, Mississauga, Ontario]:
A man cleaning a birdfeeder on the balcony of his condominium apartment in this Toronto suburb slipped and fell 23 stories to his death. “Stefan Macko, 55, was standing on a wheeled chair when the accident occurred,” said Inspector Darcy Honer of the Peel Regional Police. “It appears that the chair moved, and he went over the balcony,” Honer said.