Blistur appearances in Fernandina Beach are becoming fewer and farther in between as they become more in demand at larger venues and cities away from Jacksonville. 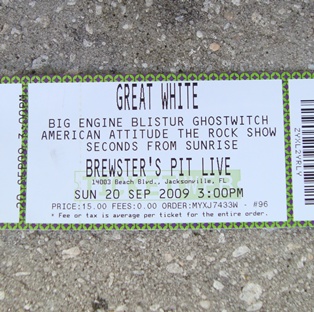 The rock band, Blistur, from Jacksonville, Florida, is appearing at some great concerts over the next few weeks, such as opening for Great White on September 20 at Brewsters Pub & Pit, located at 14003 Beach Boulevard. This exciting event begins at 3:00 pm and also includes performances by Big Engine and the Ghostwich Family Band.

Blistur has recently released their latest EP, Bloody Mary. Their CD’s are available on their Web site or at their concerts. Their newest original hit, Liar, was introduced to an appreciative crowd at the Sandollar on Heckscher Drive over the Labor Day Weekend.

Another great show will be the two nights they take the Milledgeville Thunder Rally stage in Milledgeville, Georgia, on October 2nd and 3rd. Once considered just a local band, Blistur now has followers that come not only from the southeast region, but they have fans around the world!

If you haven‚Äôt seen them yet, they will be on Amelia Island September 12th at Wicked Davey‚Äôs at 8:00 PM. Their appearances in Fernandina Beach are fewer and farther in between as they become more in demand at larger venues and cities away from Jacksonville. While disheartening for their local fans, this is a well deserved momentum for the rockin‚Äô trio Blistur!