Blues doesn't happen on a festival stage until it has happened on the stage of life. Just ask Roger Hurricane Wilson who lives it every day. 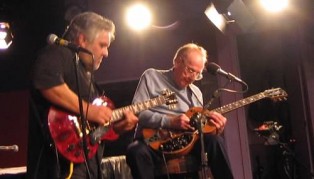 The Amelia Island Blues Festival is bringing noted blues guitarist Roger “Hurricane” Wilson back to Main Beach; and this time Roger will act as Master of Ceremonies for the entire festival weekend.  Roger’s long and storied musical career provides him with a unique perspective and practical insight into the blues.  The great bluesman Hubert Sumlin said of Roger, “this boy knows what he’s doing,” and worldfamous guitar innovator Les Paul remarked that Roger “plays some great blues.”

In addition, Roger will bring his much heralded “Blues in School” program to the 2012 AIBF.  Students from Fernandina Beach High School, led by music teacher John Robinson, will again open the Saturday morning blues festival at Main Beach and will be joined by Roger for at least three classic blues songs, all designed to help keep the blues alive by introducing the genre to the next generation of musicians.

Taking his famous moniker from Hurricane Donna, which devastated his New Jersey hometown in 1960, as well as from his raucous blues renditions, Roger “Hurricane” Wilson has played with many of the greats, including B.B. King, Buddy Guy, Little Milton, John Mayall, and Savoy Brown, to name just a few.

Roger’s latest CD release is the much anticipated live recording performed with the Shufflejunkies at the 2011 Amelia Island Blues Festival.  Also in the works, a compilation of recordings with the legendary Willie “Big Eyes” Smith, due for release this summer.

For those that wish to become more familiar with Roger’s music, check out his first two CD’s for Hottrax Records, “Hurricane Blues,” released in 1994 and “Live from the Eye of the Storm,” released in 1996.  Both received airplay on well over 100 stations across the U.S.  In 1997 Roger decided that it was time to step up to the next level, forming his own record company, Blue Storm Records. This venture gave rise to the third CD, “The Business of The Blues.” The fourth CD is called “Live at the Stanhope House,” recorded at that legendary blues club in New Jersey.

A fifth effort, all solo acoustic, “Pastime” has also received much critical acclaim and “The Ohio Connection” was released in late April, 2004.   For a complete list of music, visit Roger’s website at hurricanewilson.com.

In addition to playing between 250 and 300 nights a year, Roger also produced and hosted his own syndicated radio show on nearly 100 stations around the country.