The plane, pictured, was located approximately ten yards off the runway resting on its undercarriage with no landing gear exposed. 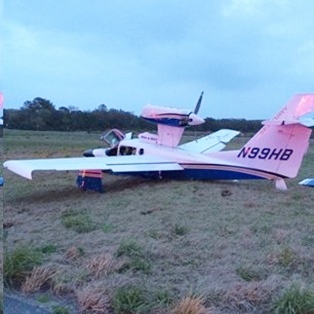 The plane, pictured, was located approximately ten yards off the runway resting on its undercarriage with no landing gear exposed.

The pilot and only occupant, Christine Mouterde-Bak of New York, New York was inside the cockpit, where she was found to be conscious, but complaining of back pain. She was transported to Nassau Baptist ER by Fire-Rescue.

Preliminary investigation is focused on the plane’s landing gear, which apparently was not deployed. The plane reportedly struck the runway and skipped twice before sliding off the end of the runway.

Investigators from the FAA are currently investigating the incident.