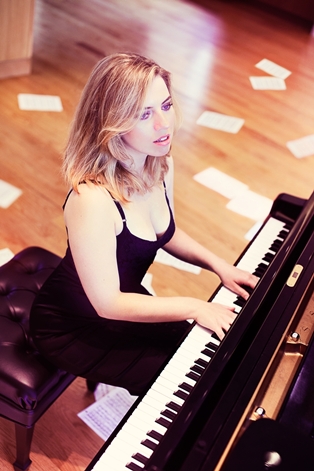 Paremski, hailed by music critics as one of the leading pianists of her generation, will perform Chopin’s Ballade and Piano Concerto No. 2 and Franck’s Sonata for Cello and Piano. She will be joined by Christopher Rex, the AICMF’s general and artistic director and principal cellist of the Atlanta Symphony Orchestra, and members of the Jacksonville Symphony Orchestra.

At only 26, Ms. Paremski has thrilled audiences around the world with her astounding virtuosity and interpretive abilities. A true musical prodigy, she began her piano studies at the age of 4 at Moscow’s Andreyev School of Music. After coming to the U.S. at the age of eight, she studied at the San Francisco Conservatory of Music before moving to New York to study at Mannes College of Music, from which she graduated in 2007.

At 15, Ms. Paremski debuted with the Los Angeles Philharmonic and recorded two discs with the Moscow Philharmonic Orchestra. She was awarded the prestigious Gilmore Young Artists prize in 2006 and the Prix Montblanc in 2007. Ms. Paremski was named Young Artist of the Year by the Classical Recording Foundation in 2010, and her first recital album was released in 2011, which debuted at No. 9 on the Billboard Traditional Classical Chart.

Other great concerts in the WinterFest 2014 series include:
-Beer & G-Strings with the Vega String Quartet on February 9
-Chamber Pops-Trumpet Invasion-with Rich and Brandon Ridenour on February 11
-Romantic Virtuosi with Chee-Yun, Andres Diaz and Wendy Chen on February 15
-The Magic of Debussy, The Flamboyance of Jean-Yves Thibaudet on March 2

For complete information about the performances and schedule of the 2014 Amelia Island Chamber Music Festival, visit www.aicmf.com.

About the AICMF
Entering its 13th season, the Amelia Island Chamber Music Festival has become one of the most prestigious music events of its kind in the Southeast. The Festival is a not-for-profit, tax-exempt organization under Section 501(c)(3) of the Internal Revenue Code.