"The larger the island of knowledge, the longer the shoreline of ignorance." 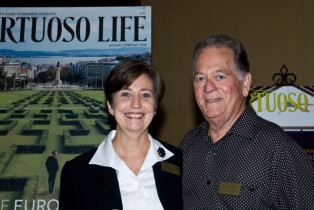 Rest in Peace Jim Wallace, your community is grateful for your inspiration

Some weeks are just harder than others as we say goodbye to people who made a difference in this world because of the force of nature they were in life.

Last Monday I received message that Stephen Covey had unexpectedly passed away at age 79 from complications after a bicycle accident and this afternoon I received word that Jim Wallace, founder of the Travel Agency here on Amelia Island had passed on after a year long illness.

I had met Covey on several occasions during my early publishing days in NYC and as I phased out my corporate existence by moving to the Caribbean Islands, Stephen Covey became world famous as the author of “The Seven Habits of Highly Effective People” in 1989;

Jim Wallace‘ whom I met through my Internet work for the  Travel Agency, thought it was dangerously wrong ” to know the price of everything and the value of nothing.”

Stephen Covey insisted we focus on our character, values, conduct, respect for others, to operate with unflinching integrity. He inspired us to have the courage to be extraordinary – not just of ourself, but in our ability to grow, develop, improve and enrich and seed greatness into countless others. He also urged us to have patience.

Jim Wallace made the very astute observation that often “The larger the island of knowledge, the longer the shoreline of ignorance.” He was honest to a fault and his business acumen was confirmed in the mantra “Take care of the client and your staff and the bottom line will take care of itself.” He started The Travel Agency in 1974 when most of the people in Fernandina thought they needed a passport to cross the bridge (so to speak)

Stephen Covey would have been proud of Jim Wallace, if their paths had ever crossed.

We lost two forces of human nature this week that inspired us to do better, to be decent and to be proactive. I’m sad yet proud that both men have in one way or another contributed to my life and made a better world.

Rest in Peace and thanks for all your inspiration.