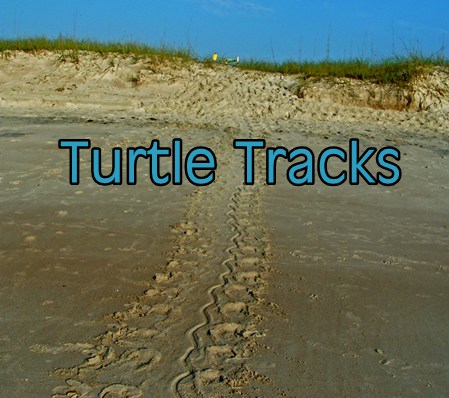 No sooner did the invasion of our beach for the Memorial Weekend subside, we witnessed another mini invasion; the one lonely straight forward track of a Sea Turtle laying her eggs in the Dunes. Without exactly measuring the track I would estimate it to be about 3-1/2 feet wide, which kind of freaked my little Snorkie dog out. On his 12 pound level this enormous “tire” track may have looked like the invasion of a sea monster. I’m not expert enough to identify the tracks as positively Loggerhead or Green Back but seeing tracks like these give me hope. Hope that maybe it’s not too late to save these beautiful and fascinating reptiles from extinction. The species are endangered because of fishing nets, outboard propellers on boats, plastic shopping bags that look like squid and stupid people who think there is not enough food around otherwise and because of its rarity, turtle steak must be a delicacy.

Last year during one of our daily beach walks my wife and I found a beautiful little hatchling that was lying exhausted near the waterline, apparently not able to get through the surf. He or she was the size of the palm of my hand and apparently considered it a welcomed resting place for the ten minutes or so that I studied the little creature. I tried to set it back into the water several times behind the first surf waves, but she couldn’t quite get beyond the wave action.

Finally we waved down an experienced surfer out on the waves and asked him if he could take the little turtle beyond the pier where the surf seemed less violent. The young man gladly complied, carefully took the little hatchling on his board and paddled far into the ocean. He raised his arm when he released the little one and we gratefully waved and then sat down for about half an hour in the sand while the sun gave us our Vitamin D for the day. We didn’t see the little turtle back on the beach which gave us hope that she might have made it. Survival rate to maturity for Sea Turtles is only one out of a thousand ping pong ball sized eggs and mature females nest every other or every three years, laying 3 or 4 clutches of an average 75 to 150 eggs in a nesting season. Simple mathematics dictates that it takes the total egg production of two mature females for one single offspring to survive every 2 to 3 years. I’m proud to live in a place where the well being of Sea Turtles is highly guarded.

This new track, very close to my house, will get my special daily attention and I have marked on my calendar the due date for the hatchlings to appear as July 20 or there about. I will let you know how the nest fares.