In a nervous beginning the Dutch conceded an unnecessary goal but they fought back against a progressively negative Brazil with two goals from Wesley Snijder (officially only one goal). The gasps can still be heard when Ghana's Gyan missed the penalty in the 122 min. overtime that would have send his country into soccer history. It was not to be and Uruguay eliminated the Black Stars to meet Holland in the Semi finals. 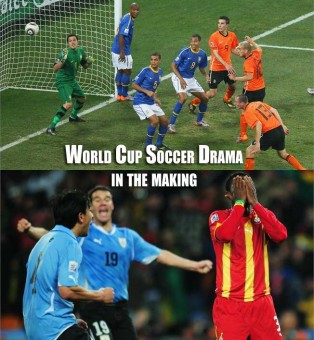 If anyone ever had to write a scary soccer scenario, “The African Queen” movie screen writer would have likely gotten the job. Uruguay would have been eliminated in the 122 min. in overtime if Ghana’s Gyan had kept his cool after a last minute hands-ball penalty. Ghana’s nerves and everyone’s in the stadium were fried with a mixture of anticipation that Ghana would take its place in history as a semi-finalist against the Netherlands who earlier in the day, in it’s own thriller, beat Brazil 2-1.

It wasn’t to be as striker Gyan powered his ball high against the crossbar and with it the golden chance to become the first African to power the African continent onto the highest Global Soccer Platform and becoming the symbol that would have given all the people of the African nations the hope and possibly the drive that soccer could help them rise above the worlds poverty line. I sincerely hope that Ghana and with it the African continent can refrain from seeing this as a defeat but rather as a promise to come in the future, since hope is the only emotion that drives people to greatness.

Ghana still had a chance in the penalty shootout to reach the semi finals but poorly taken penalties from Stephen Appiah and Dominic Adiyiah sealed the fate that Uruguay wrote a piece of history for themselves. They get a chance to reach the highest soccer glory if they can muster up a win over Holland and whomever else that will reach the finals. It won’t be easy since the Dutch got their boost of confidence today reaching the semi finals by putting Brazil out of the tournament and clearing the way to reach their finals.

A nervous start of the Dutch rattling mistakes gave the Brazilians the lead in the tenth minute through Robinho after a bad clearing from the dutch defenders. Although the Brazilians showed class and were hunting down a second goal their uncalled for “superiority” got the best of them. Holland under the tirelessly efforts of Marc v. Bommel and Wesley Snijder progressively started reorganizing the Dutch game and slowly creeping up to the expected standard.

Often brilliant combination soccer by the Brazilians got more and more interrupted by the unrelenting efforts of Kuyt, v. Bommel and Ooyer leading to counter attacks from the Oranje Team. Before halftime the Brazilians where able to keep Robin v. Persie and Arjan Robben in check however the dark clouds where packing over the Brazilians. In the 40th min. Kaka was given a fantastic chance and calm and collected he took aim with a curling shot that would have been the Tournament’s most beautiful goal yet Maarten stekelenburg showed that he  is the undisputed goalkeeper of this tournament with a fantastic save denying the Brazilians to take a 2-0 lead that would have made the game much tougher for the Dutch.

The second half saw a further deteriorating game with many fouls leading to a series of yellow cards for the Brazilians and their sense of a team spirit started running down fast to freezing point. This was compounded when Julio Cesar, considered the best goal keeper in the world, made a fatal mistake by misjudging a free kick after foul number 20 +. The ball sailed high past everyone and kept curving towards the goal and Julio Cesar completely missed the ball while Melo slightly touched the ball that landed in the back of the net. Technically the goal was scored by Wesley Snijder but the slight touch made the officials judge that it was an own goal.

This set the game further ablaze and Holland started playing soccer while the Brazilians played more against themselves than their opponent. Within minutes of the equalizer the Orange fans had reason to celebrate again after a masterfully taken cornerkick by Arjan Robben serving Robin v. Persie at the near post who extended the ball that landed on Wesley Snijder’s head, normally he does not score with his head, but this time his nod hit the mark and made the net bulge a second time.

The Brazilians had to create pressure and it seemed they managed for a couple minutes but when this did not resulted into rewards their mood went south leading to a Red Card for Melo after not only fouling Arjan Robben but also kicking him when he was floored. The Japanese referee had no choice but to pull his red card upon which the Brazilian game further deteriorated. The south Americans can feel lucky that the soccer playing Dutch did not capitalize on the many chances they created since the game could have easily become a shootout match. It wasn’t to be, but the Dutch finally got their revenge for two previous ousts in 1994 in Dallas and 2002 in St. Etienne France when Brazil denied them to advance to the semi finals and finals respectively after epic battles on the fields.

The Black Stars from Ghana will have to be content with having become just the third side from the continent to make the quarter-final stage, although they could have won the match with the final kick of extra time after Luis Suarez handled a goal-bound effort on the line. But with Suarez sent off, their top scorer, Asamoah Gyan, smashed a penalty off the bar that would have tipped the scales to the Africans after Sulley Muntari and Diego Forlan had scored either side of half-time.

Uruguay started the match on the front foot, looking dangerous from dead-ball situations and through the dynamic duo of Forlan and Suarez up front. Suarez had the first real chance in the 11th minute when he beat a Ghanaian defender down the the left. He cut into the box but blasted his shot right at goalkeeper Richard Kingson.

Kingson was the hero for the west Africans twice in short succession. In the 18th minute, from Forlan’s corner, he reacted quickly to keep out the ball after it deflected off John Mensah and was seemingly destined for the back of the net. Seven minutes later, he rescued another defender, this time Isaac Vorsah, who missed a tackle allowing Suarez in on goal. But the net-minder just got his fingertips to Suarez’s effort to push it over acrobatically.

finally Ghana  settled into the match and only narrowly missed going ahead twice near the half-hour mark. From Ghana’s first corner, Vorsah headed just wide of the post. A minute later, Gyan skimmed the other post after a strong run and cross from Kevin Prince Boateng. The Portsmouth midfielder almost opened the scoring himself in spectacular fashion in the 45th minute, but his overhead kick in front of goal spun off his foot. However, the west Africans got their breakthrough on the stroke of half-time as Muntari scored with a curling 35-yard shot that seemed to deceive the goalkeeper before finding the left-hand corner.

But if they ended the first period on a high, Ghana started the second on a low as Forlan’s free-kick from near the left corner of the box fooled Kingson with its swerve in the 55th minute and bulged the net. The Atletico Madrid hit-man continued to play with confidence and in the 63rd minute he brought the ball down well on the left side of the box in a dangerous position. His cross beat Kingson, but Suarez, who had three goals coming into the match, could only volley into the side-netting at the far post.

From her on the match became an open ended hit and miss with both sides creating dangerous situations before the goals but neither side was able to put their claim to the next round into reality.

Overtime was the dessert, and what a dessert it was with Ghana clearly have the better chances yet it took until the last effort 122 min. drive to claim victory. It was not to be with the missed penalty and the subsequent penalty shootout Uruguay showed the better nerves and the acrobatic antics of Abrue send the south Americans into the Semi Finals.