Those who get too big for their britches will be exposed in the end. 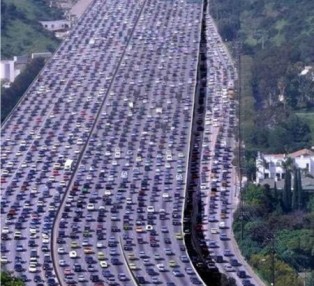 We won't stop until we breath eachother's Monoxide

Today on October 31, 2011 the world population will cross over the 7 billion line, duplicating the 12 year cycle of the previous milestone from 5 to 6 billion inhabitants  according to the United Nations’ population division. Technically that means growth is slowing down a tad but experts claim that we are probably looking at 9.5 billion by 2050, and that’s up from 2.5 billion in 1950. 7 Billion people growth in one hundred years time? We either start developing means to sustain this explosion of hungry people, find ways to expand humanity into the universe or be prepared to fight the good fight of resource desperation.

Imagine, the world’s population didn’t reach 1 billion until 1804, and it took 123 years to hit the 2 billion mark in 1927. Then the pace accelerated — 3 billion in 1959, 4 billion in 1974, 5 billion in 1987, 6 billion in 1999, 7 billion in 2011 , 8 billion by 2025 and 10 billion long before the current projection of 2083. Children born today will face a world that has not enough developed resources to sustain that number of people.
And the first huge challenge will be water and as water shortages will be fueling regional destabilization, migration to developed regions of the world will put enormous pressure on other resources such as food and energy.
On the other end of the spectrum is the claim that between 2005 and 2055 agricultural productivity will have to increase by two-thirds to keep pace with rising population and changing diets.

I recently read this sad observation from a woman in one of Africa’s fastest growing countries as she regretfully ponders the future for her large family with 9 children. “I regret to have made all those children,” she says. “If I were to start over, I would only make two or three. Children were a good labor force in the past when there was enough space to cultivate,” she said. “Today I can’t even feed my family properly. My kids just spend days doing nothing.”
After her fourth child, she began to worry how her family could be cared for. “But my husband was against birth control and wanted as many children as possible,” she said. “It was delicate because he could marry another wife.
“My friends advised me to go to a nearby clinic, but I was told I must come with my husband. Now I have laid the issue in the hands of God.”

I wish I had that deep faith. As one who was born in 1950, when there were “only” 2.5 billion of us around, I will probably run out of time before the world’s carrying capacity forces the issue into the foreground of the survival of our species. But for all you young ones out there, you may heed the words of hockey great Wayne Gretzky when he said: “I don’t care where the puck is, I’m going where the puck is going to be.” With cities like Mexico City, Djakarta and Mumbai already now reaching massive populations of 30 to 50 million, no one will realize in time that the puck has left the playing field a long time ago.

As massive populations are going to move back to the countryside it seem inevitable that many national borders across the globe will be re-drawn in the next 25-50 years.