Lab mix named Shadow is looking for a Forever Home that matches his friendly, easygoing personality. He's beautiful and exceptional and still mostly a big puppy. 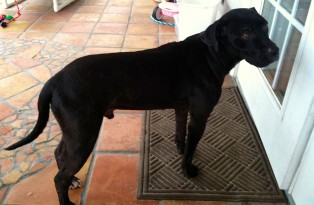 Shadow checking out what’s going on inside.

This is a story about man’s most amazing companion.
We lost our all-time incredible doggie Scootertje almost exactly a year ago and it was a devastating loss. He was only six and cancer took him from us fast and furiously. Many people would ease the pain by quickly finding another companion and that is probably the best way to get over a loss like that. We couldn’t, so instead we decided to sponsor and donate as much as we could to save other animals and slowly rebuilt the courage to get face-to-face involved again. Several dogs in South Africa and the Ukraine received our help, were healed and placed in forever homes. We still get happy updates on how well they’re doing.
But then at the end of 2014 we decided we needed to expand locally and took in a foster dog from the Nassau County Animal Control Humane Society.  On New Year’s Eve the four of us drove over to pick up Amos, a black/white spotted Lab/American Bulldog mix from the pound. He was suffering from skin ailments and was diagnosed with low to moderate heart worm. He had been at the Humane Society since July and desperately needed a temporary home to get him through the invasive heart worm treatment process. At 58 pounds he also needed to get some more “meat” on him.

We bonded instantly at the yard and after some basic instructions from the kennel’s trainer, Amos jumped into the truck and sat prince-like between our two adult sons on the back seat. His friendliness and ease showed us immediately that he had been used to car rides before he came to the shelter.
After one or two mishaps on the first day, we quickly learned his daily routine and no accidents in the house ever since! The shelter named him Amos but after trying multiple names on him (as he paid no attention to the name Amos) we found his name to be Shadow. He answers to this and seemed much happier that we “knew him”.  We wish we knew something about his past because he definitely was loved and cared for at one time.  We also were told that Shadow is 3 years old, but question that assessment as well, because he still has all the makings of a puppy, eager to learn, please and being playful.

We’ve worked with Shadow now for 3 weeks and found this dog to be exceptional in so many ways that we can recommend him to anyone looking for a life companion or family friend. We work from home so yes we have a lot of time to observe and correct, but also to mold his personality, and this sweet dog has tons of it. Honestly we’ve never seen a dog with so many expressions in his face and eyes.

So here is the situation: We are the foster parents to Shadow and we can only foster until February 15th and we would like to find him another foster home or even more preferably a FOREVER home. We would be happy to let you meet him. Since we are just fostering, you will have to adopt him through the Nassau County Animal Services and we will help with that if you so need. Our goal is for him to never go back to the shelter. 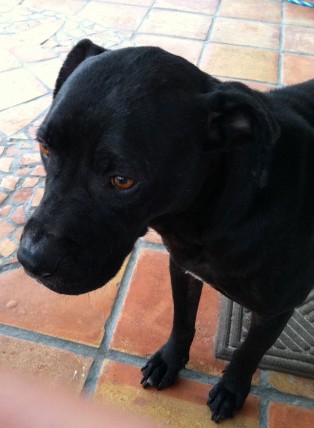 We cannot believe someone has not fallen in love with this special, loving, sweet and obedient dog. He is truly amazing and we have had many dogs. The skin rash he had is in the process of clearing that up and its already so much better that our neighbor, who came back from a week cruising was astonished at how good he looks. He also came back NEGATIVE for mange.
He has tested positive for heart worm but it is in the low to moderate stage. He has began receiving antibiotics and will get his first shot soon. FAN is picking up the bill for his heart worm treatments. All you have to do is make the appointments and take him to his vet. His first shot is scheduled for January 26th, which we will take care of. He will have to receive one more shot and should be cured completely, but he will definitely need to receive monthly heart worm prevention medicine as prescribed by the vet. The vet said other than these two issues, he is very healthy and should be fine while being treated. He takes medication just fine, just put it in his dry food and he chows down.

Whoever is lucky enough to adopt him will be getting a healthy dog who is all caught up on all medical and already neutered.

Below are some of our experiences with Shadow.

• He would love to sleep on the furniture but since most of ours is white, that is a no-no in our home. However he is quite happy to lay on his blankie, but he definitely likes to lay on something. He prefers something besides the hardwood floor. A wonderful woman, Debbie, gave us “the cadillac of dog beds” and he loves it dearly. He will even go into his room and put himself to bed. It’s so cute.

• He has never gotten into the garbage. This I find amazing. We have a lid on ours (kitchen) that he could easily knock it off, but has never even tried this. He will occasionally walk by and sniff it, but that’s it.

• He does not dig holes in the yard.

• You can pet and touch him while he is eating and he could care less. He is not protective over his food bowl or toys for that matter.

• For now he will counter surf, so we keep everything pushed to the back or put away. We are working on this with him. He has never seen jumped on the counter though. He is only interested in food that is left within reach on the counter.

• He walks on his leash like a perfect gentleman. Never tugging or pulling. We have on occasion had him off his leash while in the garage and one time he snuck out the door when it did not close correctly but he never tries to bolt or run off. As soon as you call him, he comes back. Actually he doesn’t even try to venture away from the house.

• When eating he wonders what your having but when you tell him to go lay down he will. He never just sits and stares at you while you eat. Most of our previous pets did!

• He did not bark for the first three days he was with us. He now only barks if he sees someone go by the yard, or knocks on the front door and he stops when you tell him to quit.
We can only assume it’s because he now feels at home, comfortable and protective.
He is protective of his people and will give warning barks. Never snarls though.
He oddly understands or feels when someone is not a “dog” person and prefers to have nothing to do with them. I think this is the only dog that can give dirty looks. It is very amusing and everyone gets a chuckle out of it.
There is a barking dog next door, who Shadow cannot see due to the fence, and he has never barked back.

• He has zero fear of fireworks or thunder. He will lift his head to look around, but that’s it. (On New Years Eve there was a lot of fireworks going off on the beach, as we live across the street.)

• He easily walks up and down the stairs, so two-story homes are no problem.

• He is okay with being bathed, not thrilled, but will listen when you tell him to settle down.

• He loves car rides. He is perfect in the car. He likes looking around. He has not tried to poke his head out the window, but that’s not saying he would not if given the chance.

• He does not “mark” every inch of his territory like some dogs. He does his business and pees outside and that’s that.

• Because he initially needed to gain approx. 5 pounds, we have been feeding him 3 cups of vet recommended Purina One food at each feeding. It looks like he’s gained at least 2-3 pounds by now.

• He drinks a lot of water.

• We tried crating him the first two nights and he does not like it, nor is he used to being crated. He is an extremely chill dog and does not bother anything. He has his own room where he sleeps on his bed and is quite happy about that. Frankly however wherever his bed is that’s where he will sleep. 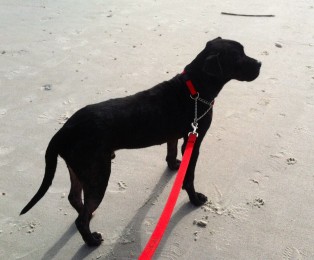 Boy I love the beach!

• He mainly likes playing with his toys “with you” like tug-o-war. He loves a good chew bone. He thinks small or tennis balls are for eating, so we do not give him those.

• He is the biggest people pleaser we have ever encountered. He is extremely obedient. He wants to be near his people and is happiest laying or sitting close by to his humans. He would be happier in your lap but obviously he is too big for that. However, he likes nothing more than sweetly laying his head in your lap.

• He will occasionally get excited and jump up but stops when you tell him no. Very rare for him to jump on anyone. He has never jumped on the grand children. Also on the occasion when he does jump up, he does it so gently that it does not knock you over. I call him a circus dog. He also loves to give hugs.

• We have three small grand children (five and under) who all love dogs and he is great with them. He patiently lets them pet him, will sniff at them sometimes, but other than that he does not bother them. He realizes they are little and just leaves them be. He seems very aware that they are smaller than him.

• He is walked on the beach daily and when he encounters another dog (big or small) his tail is wagging and he just wants to sniff and say hi. We are taking him to the dog park soon to see how he interacts with other dogs. We do not know how he is around cats.

• He has never once shown any sort of aggression, even when at the vet getting unpleasant things done. Does not even growl. He did whine some poor baby.

• He does not try to be the alfa dog. He is very content to let you be in charge, and rather seems to prefer it that way.

Last but not least, the 64 dollar question? Why don’t we keep him ourselves? Truth be known, he has already stolen our hearts, but after 10 years not visiting our family in Europe, we made the plans to go visit for at least 2-3 months this year, before we get too old or bogged down by age and work. Rest assured that if preparations had not been in a far advanced stage, you would not read this story here and Shadow would have found his Forever Home already.

FAN will finish supporting his heart worm treatment until he is cured, even if he is permanently adopted.