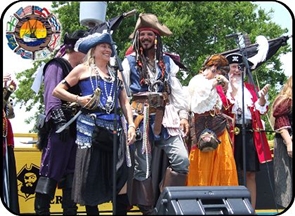 The Isle of Eight Flags Shrimp Festival,‚ÄúAlways Held the First Weekend in May‚Äù, is now just two months away! The official dates are set for May 1-3, 2009. The Pirate Parade is themed, ‚ÄúHome Grown Shrimp, the Pick of the Litter‚Äù and takes place on Thursday, April 30, at 6:00 p.m.

This is the 46th anniversary for the festival which features more than 300 juried Arts & Crafts exhibitors, in addition to Antiques & Collectible vendors, a Fun Zone with kid friendly activities, live entertainment from multiple stages and Fernandina Beach and Nassau County‚Äôs official Ambassadors to the World, the Fernandina Pirates Club!