China sees the Caribbean as the natural distribution basin for the world's future needs for energy and consumer products. In anticipation of the widening of the Panama Canal by 2014, they are strategically taking positions in the territory. 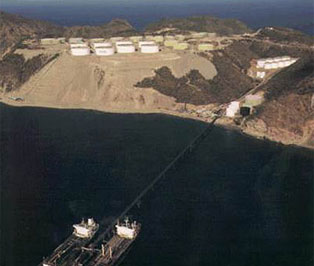 Statia Terminals has a lot of space to grow

This is a story about oil and how the players and roles are rapidly changing in the world. To paraphrase a favorite line in Kurt Vonnegut’s novel Slapstick: “Hold on tight buddy, we may end up miles from here!”
Sure we are still seeing too many SUV’s and Hemi trucks on the road here in the US, but they will disappear the moment the next price hike starts at the pump.
Last week we learned that for the first time in our history of annual motor vehicles sales, there were more car sales in China than in the US.

Well get over your national pride because that’s the way it’s going to be from here on. With a population that is 5 times that of the US just coming to financial maturity, China will take a lot of number 1 spots from here on.

A couple of days ago I saw the small sign that signaled the big change that is coming.

During the 20 years that I lived on the Caribbean Island of St.Maarten, our sister island St. Eustatius about 40 miles to the south was host to a 11.3 million barrel oil storage and transshipment facility called Statia Terminals. Since 1995 a storage space of 5 million barrels was leased to Saudi Oil Company Aramco.
Per December 31, 2009 however, when lease renewal came up, the Saudis said goodbye to the facility in favor of storage facilities in Okinanwa, Japan, but what could have been a minor blow to the Caribbean Island’s economy and its 3,000 inhabitants, was quickly addressed by a new lease taker in the form of PetroChina.
The Chinese well aware of their increased emergence in the world of energy, slipped quickly into the spot and leased the storage for PetroChina. Now a 5 million barrel storage does not even supply the US with 5 hours of energy needs on a regular day, so why the strategic importance behind this move?

Because with two additional major players entering the world stage, Aramco has decided that the US has peaked in oil consumption and it’s time to move on to the next growth market, which meant taking leases on storage facilities closer to the final consumer, which they found in Japan.

China in turn is slowly and quietly building its presence in the Caribbean from airports in St.Lucia, hospitals and malls on other islands and a major Chinese population presence on most islands in the chain.
With the Caribbean islands as push off point, the Chinese are developing major interests in South America and an oil storage facility on a rock like St. Eustatius, that is in the middle of a constitutional revamping with the Netherlands and has little else to offer but some tourism, a 11.3 million barrel storage can easily be expanded to 50 or 100 million barrels. With that type of storage there is price control in the offering, big enough to assert that oil prices will soon be flying sky high.

There is a lot of confusion circling about oil’s scarcity versus new oil finds, OPEC scaling back production to control pricing, demand increasing because of emerging mass markets such as India and China and the dying dollar as world reserve currency. It is actually a fact that in their effort to diversify away from the dollar, China is now rapidly employing the other two world “currencies”, gold and oil, to gain prominence.
Yet even more important is the realization that with the current $5.25 billion dollar widening and expansion project of the Panama canal, which by 2014 will allow oil tankers with a 1 billion barrel capacity to pass through, the Caribbean Basin will become the world’s foremost storage facility for easy access and transshipment to North and South America and even Europe.

Saudi Arabia’s only contribution to the world is oil so they need to follow the petro dollars wherever they go, which is increasingly China and the Far East. China however has a lot more at stake as the manufacturer for the 5 continents. A strong foot on the Caribbean Islands, combined with a widened Panama Canal, means a major move into the future and the positioning of energy and distribution.

If you have any doubt about how important the Caribbean Islands are to the Chinese, than be aware of the fact that the very first plane that arrived on Haiti’s Port au Prince in aid of the earthquake survivors was an Air China Plane with 20 tons of relief supplies, sniffer dogs, 50 plus rescue personnel and Chinese soldiers.
China knows where the future is leading us, contrary to U.S. lawmakers and the rest of the inside-the-beltway crowd. With more global players in the game, oil prices will go up…and a lot, because in this new world it is not acceptable that a gallon of fuel at the pump in Europe cost $6, while here in the US that is $3 or less.

With China getting more and more in the game, there’s even a very real chance Washington will discover that it’s been maneuvered at least to the sidelines, and perhaps even out of the game.

‘Experts’ claim that it won’t be until 2018 that China will overtake the US in oil consumption and become the major price setter for the commodity in the world. I keep reminding myself that China’s car sales were not supposed to overtake the US sales until 2016. Yet it did 7 years early, in 2009.
Go ahead if you want to make bets on when gas prices will sky rocket, but I would start thinking in terms of hydrogen converters, hybrid cars, LPG fueled cars, vegetable oil fueled cars or any other mileage expanding or fuel saving option, because it’s not going to take until 2018 for China to start dictating gas prices.