Some Economic Concerns for 2011 and Beyond 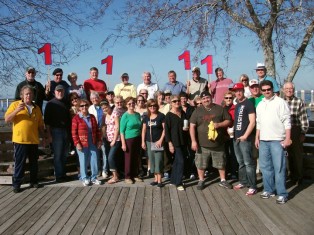 New Year's Morning Pétanque on the Waterfront of Fernandina Beach

Our first day of the New Year here in Amelia Island was nothing less than glorious. Balmy temperatures invited to a game of Pétanque on the waterfront, dressed up with coffee, donuts and dips. Dozens of aficionados showed up. A beach walk with our dog was the next stop on the agenda and before the 70° plus degree balmy noon weather would cool in the afternoon breeze, we took our bicycles and rode all the way to town, shared juice and a slice of carrot cake and pedaled back home, picking up two movies from Red Box on the way.
Almost idyllic and most pleasant. It was the first New Year’s Day we were actually not nursing a hangover in quite a few years and it felt great.
I’m planning to spend another day like this, completely recharging batteries for what will become a landmark year in the global economy.

The End of the Holiday Season Party Conversations

I have attended so many discussions at parties over the past Holiday Season, where I observed disbelief and inability to comprehend the real picture of where we stand, that I felt it worth while to just have everyone come to their own conclusions about inflation or deflation or why banks supposedly don’t loan to small businesses and why the current official unemployment percentage of 10% is only exposing the beginning of the downfall.

It also remotely explains why the Federal Deposit Insurance Agency (FDIC) closed 311 banks since Wall Street Giant  Lehman Brothers went belly up on September 15, 2008. Trusted sources already have allocated 150 bank closings for 2011, while the FDIC had 860 problem banks identified at the end of September 30, 2010.

I have stacked up 3 videos for you that if watched intently, should be able to prepare you for what is very most likely going to happen to the US economy, and potentially the Western World, over the next 5-8 years.
I hope you take the time on this second day of 2011 to connect the dots and learn that low overhead and knowledge of internet sales technology will be the safest bets for continued income generation.

The first video covers Federal Reserve’s Chairman Ben Bernanke in his first interview as the second most important man in the USA, at least where matters of the economy are concerned. Bernanke explains what happened and why the Feds had no clue that it could happen.
Pay particular attention t 8:20 min. into the video and beyond where it explains that lots of physical money is being printed.

The second video is a 15 minute interview of Ben Bernanke early in December 2010, when it turned out unemployment figures of close to 10% seem to have become structural and that 4 out of 10  unemployed have been out of work for 6 months or more. Employment for college educated workers hovers around 5%, while only high school graduates are looking 12-14%. A clear and present danger is that America is rapidly becoming a deeply divided and unequal society, compounded by the fact that too many economic decisions are now becoming political.

The third video is a funny but very sharp analysis of the Bernanke videos by Comedian News Anchor Jon Stewart on Comedy Central.

After watching these videos you may (or may not) understand my closing remark for today:

Remember that Bernanke is not a closet anarcho-capitalist secretly out to reform the entire system. He’s a mainstream academic MIT economist, and a bureaucrat who believes he can fiddle with the economy and control it. Just remember what he said about being able to stop inflation simply by raising interest rates in 15 minutes and you should realize he thinks he’s walking on water. Also remember his evasive answer to the question about how the Fed missed the impending crisis in 2008: as he said that “large parts of the financial system were not adequately covered by the regulatory oversight.”
The Fed is 98 years old. I do hope it will be an institution of the past before it turns 100, but I know that won’t be the case.

So today, I will once again enjoy the magnificent start of 2011 in blissful sunshine on this beautiful Floridian Island. Amen.