South Florida condominium prices already have dropped up to 88 percent from their 2006 peak, and the meltdown isn‚Äôt over yet. 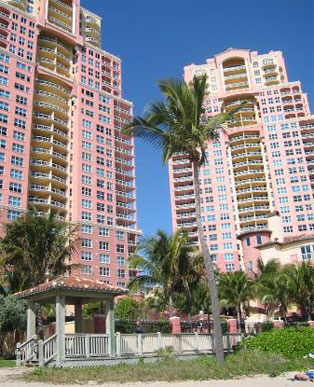 South Florida condominium prices already have dropped up to 88 percent from their 2006 peak, and the meltdown isn’t over yet. So says real estate consultant Jack McCabe, who has earned the reputation as South Florida’s top residential real estate analyst. He told Bloomberg that condos which sold for $1,000 per square foot in 2006 now command prices of only $125 to $350. And he says prices could ultimately drop to $100 a foot, less than half the condos‚ construction costs and a level last seen 20 years ago. If you’re thinking you can come here and buy and sell condos for a profit in less than five years, you’re sadly mistaken, McCabe, whose clients have included Credit Suisse and Pulte Homes, told Bloomberg.

Over the last year, condo prices slid 31 percent in Miami to a median of $144,700, 15 percent in the West Palm Beach-Boca Raton area to $112,200 and 36 percent in Fort Lauderdale to $85,100, according to the Florida Association of Realtors. Prices will probably slip further when the $1 billion worth of South Florida condos financed by failed Corus Bankshares goes on the market, said Peter Zalewski, principal of Condo Vultures real estate brokerage.

The picture may be prettier elsewhere, but Yale professor Robert Shiller is still cautious. “What should we expect in the months ahead? Not necessarily that we’re entering a new housing boom,” he wrote in The New York Times. T2 Partners’ Whitney Tilson says the apparent housing recovery is only setting us up for worse things to come. “The rebound has been stronger than we’ve anticipated,” Tilson told Yahoo! News. Yet he remains “confident this is the mother of all head fakes.”

Tilson attributes the housing upturn of the past few months to low interest rates, first-time homebuyer tax credits, falling prices and seasonality not improving market fundamentals. Experts attribute 370,000 home sales to qualified first-time buyers thanks to the $8,000 first time homebuyer credit, which Congressional leaders have pledged to extend past its expiration Nov. 30. Though some economists take this as a positive sign, others remain skeptical.

“If all you have done is shifted home purchases that would have occurred anyway from the future into the present, that is simply moving home sales around rather than increasing their overall level,” economist Kevin Gillen, vice president of Econsult, told The Philadelphia Inquirer. *