On my second lap, while rounding turn two, my front tire ran out of grip and down I went. I remember thinking, while sliding at 70 plus mph on my tail, ‚Äúthis isn‚Äôt happening, this can‚Äôt be happening‚Äù. 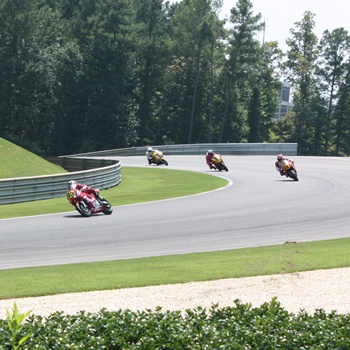 Last weekend was round (6) of the Southeast Championship Cup Series (www.ccsracing.us) motorcycle road racing circuit at the beautiful Barber Motorsports Park in Leeds Alabama (www.barbermotorsports.com). It is without a doubt one of the nicest road courses in America and is definitely the nicest road course we race at. Just how nice is it you might ask, I call it the Ritz Carlton of race tracks. In fact, it is so nice the INDY CART circuit will be racing there in 2010. And yes, that means Danica Patrick will be there too. Barber Motorsports Park is also home to the most prestigious motorcycle museums in the country. The museum in itself makes a trip there worthwhile.

But, before I get started, I‚Äôd like to first say a big ‚ÄúTHANK YOU‚Äù to my most recently signed sponsor, Search Amelia.com. Without their spiritual support and decorative stickers, I would not be able to partake in this sport I truly love.

With the toyhauler loaded, the family and I headed out Wednesday afternoon. We planned to drive a little more then halfway before stopping at a campground for the night. We arrived at the High Falls campground around 6:30 pm and set up camp. High Falls is about 30 minutes south of Atlanta and is a beautiful state park. Being only about 3 ¬Ω hours from our destination, we were in no rush the following morning to vacate the park. Anyone looking to camp just outside of Atlanta, I highly recommend you visit High Falls. 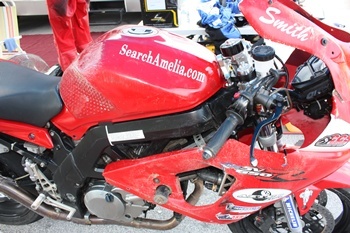 We pulled out of High Falls around 1:00 p.m. and the beginning of my downward spiral began. While traveling North on I-75, of course I missed my exit and ended up traveling straight into downtown Atlanta. Yup, Excursion, toy hauler, and all. What a joy it was navigating 52‚Äô of machinery through the concrete jungle of Atlanta, Georgia. After a few tense moments and a couple near misses, we were on I-20 heading west for Alabama. But ahhh, wait just a minute, time for some more excitement. Cruising along at 70 mph and I hear a loud ‚ÄúPOP‚Äù. Any guesses? I looked in the right side rear view mirror and sure enough, I see large chunks of black rubber being slung out from the trailer’s wheel well, a blow-out. So off to the shoulder of the highway we go. Georgia must have cut costs by not mowing the grass along its highways because the grass was waist high. Ever try changing a tire in waist high grass full of sand spurs? I don‚Äôt recommend it. Anyway, while changing the blown tire I started to hear the unpleasant sound of air leaking. Obviously, it wasn‚Äôt coming from the shredded tire I was removing. That means, you got it, it was coming from the tire directly in front of the tire I was removing. Yup, when the tire blew and started coming apart, a piece tore a nice little hole in the tire directly in front of it. So go ahead and guess how many spare tires I had, one. 8,000lbs doesn‚Äôt travel so well on one tire so after replacing the blown tire with the spare, we had to limp to the next exit and attempt to locate another tire. Now usually finding a spare trailer tire is no big deal, unless you’re me. You see, I think I own the only RV with 16‚Äù wheels. Camping world, sixty miles away didn‚Äôt even have a 16‚Äù trailer tire. Anyway, two hours later, we were back in business.

We arrived at the Barber Motorsports park around 6:30 p.m. The place is simply awww inspiring. You can see some photos here at the CCS Racing Gallery. We picked up our credentials at the front gate and off to the paddock we went to set up camp. After setting up camp, I was in desperate need of an adult beverage. With an adult beverage in hand I began to relax and enjoy the cool crisp Alabama air and started looking forward to the race weekend. Leading the Southeast point‚Äôs race always adds a little extra excitement in anticipation of an upcoming race, CCS Racing Points Standings. 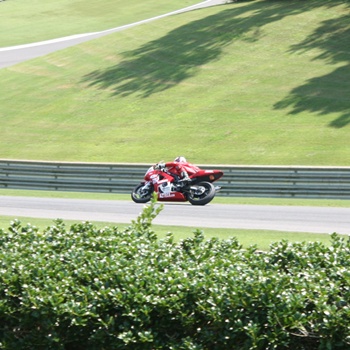 Friday morning came early and it was time for some practice. After prepping the bike, I geared up and headed out onto the track. After a few slow laps, to get reacquainted with the track, I began picking up the pace. The track is 2.38 miles long with 17 turns and 80‚Äô of elevation change. Once up to speed, it is almost like a rollercoaster ride. By the end of my first practice session, I was up to race pace and having a little fun sliding the rear tire into the horseshoe, which is a tight 180 degree left hand downhill turn. Everything felt great and I was excited upon exiting the track. After a short break, it was time for our second round of practice. This session, I planned on working on a couple corners I felt I could improve on. However, my bad luck returned. On my second lap, while rounding turn two, my front tire ran out of grip and down I went. I remember thinking, while sliding at 70 plus mph on my tail, ‚Äúthis isn‚Äôt happening, this can‚Äôt be happening‚Äù. But oh yes it was. 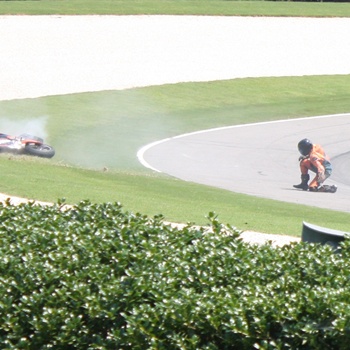 The slide was pretty uneventful up until I felt that I had slowed enough to simply jump up and run over to the bike. Unfortunately for me, I greatly under estimated my slide speed because as I attempted to jump up to my feet, I quickly found out that my slide speed was slightly faster then I could run, and so the tumbling began. So ok, that wasn‚Äôt so cool. After several tumbles, I managed to get on my feet and recover the bike, which of course slid into the tracks nicely manicured gravel traps. That‚Äôs right, gravel traps. The gravel traps are sort of like sand traps at a golf course. They are strategically placed around the track for the purpose of quickly slowing down a motorcycle or race car in the event it leaves the racing surface. Unfortunately, although a great safety feature, you can only imagine what it does to a sliding motorcycle. Luckily I was able to pick the bike up and ride it back to the paddock. Once back at the paddock, I spent the better part of the day scrounging up parts to repair the bike.

I worked on the bike the remainder of Friday morning and by mid-afternoon, it was ready to roll. My wife and biggest fan by the way, managed to hand sew a six inch tear in my leather race suit. So with all repairs made, as the saying goes, it was time to get back in the saddle. I finished the day out with two additional rounds of practice. Other then being a little overly cautious in turn two, I felt pretty good. 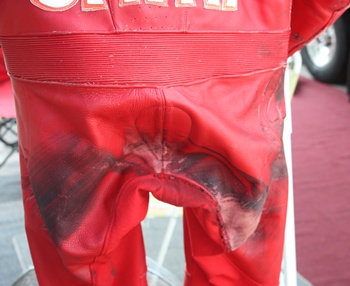 My wife stitched my pants

I was awoken Saturday morning by the sound of the announcer‚Äôs loud voice on the public address system. The day would began with two quick rounds of practice before starting a full day of Championship Cup Series racing, which included 17 sprint format races. It was going to be a long hot grueling day as for I would be participating in five of the seventeen races. As the day wore on, I became increasingly frustrated with my riding as for my teammate, Scott Anderson, of Aztec8.com, managed to beat me in every race which we participated in together. I finished Saturday with two 2rd. place finishes, one in Ultra Light Superbike and the other in Lightweight Grand Prix, Two 3rd. place finishes, one in Lightweight Superbike and the other in GT Lights, And finally one 4th. Place finish in Lightweight Supersport.

Being a twin sprint weekend, we ran all the same races on Sunday with my results being about the same. My teammate, Scott Anderson, had a breakout weekend ending this round with (3) first place finishes. So congratulations to him for finally putting it all together and getting his first race wins of the season.

With only Two rounds of racing left, the next being at Virginia International Raceway and the last being at the Daytona International Raceway, the points chase tightens. Its time to buckle down and ride smart as for a slight mishap could potentially end my bid for the #1 plate in the over-All Amateur CCS southeast region. Until next time,
Cheers!