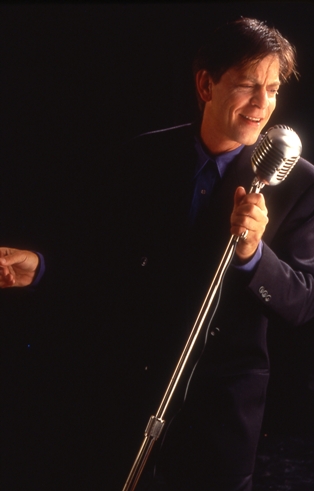 Sensational jazz singer Steve March Tormé has been added as a headline act to the 2010 Les DeMerle Amelia Island Jazz Festival, October 3-10, 2010, in Fernandina Beach. Tormé will perform Tormé Sings Tormé, a tribute show to his incomparable father, Mel Tormé, in front of an all-star big band on October 8 at the First Baptist Church auditorium. “Anyone who likes Michael Bublé or Harry Connick, Jr. will love Steve’s show, which is garnering rave reviews from all over the world,” said DeMerle. Music Connection called Tormé “more than a jazz singer – he’s a consummate entertainer,” while the Los Angeles Times said his act puts forth “a joyous sense of rhythm.” The show promises to be an exciting musical evening, complemented by extraordinary arrangements, engaging stories, and rare family photos and video of Steve and his dad.

An energetic performer at jazz clubs, arts centers, and festivals worldwide – including notable tours of Australia, England, Japan, and Canada – Steve March Tormé was born in New York City and grew up in Beverly Hills, California. Influenced by artists as diverse as Nat King Cole, The Temptations, The Beatles, and of course, his father, he is well schooled in American music history. Additionally, Tormé shows off his own songwriting expertise on his latest CD release, inside/out, on AIX Records, which boasts 12 original compositions.

Already set is the festival’s October 9 headliner, The Ramsey Lewis Trio, at the First Baptist Church Auditorium. DeMerle also recently announced a full 2010 schedule, which will begin with a pre-event Sounds On Centre concert with the Les DeMerle Jazz Band, featuring vocalist Bonnie Eisele, and the TGIF Dixieland Band, on Friday, October 1. The official kickoff show, Jazz In The Park, a free afternoon of music in Amelia Park on October 3, will showcase Orion, the U.S. Navy Big Band Southeast. Two new events will be introduced this year: Tuesday, October 5, Jazz At The Movies, an evening of jazz on film that will include videos of, among others, Ramsey Lewis and Count Basie, at the Harbor Front Hampton Inn & Suites, and Wednesday, October 6, Red White & Blues, a combination blues concert and wine tasting at the Crab Trap Restaurant with Memphis guitar legend Calvin Newborn and singer “Ma” Rider. A now traditional Latin night, with the popular ten-piece salsa band, Impacto Latino, will take place on Thursday, October 7, at Sheffield’s at the Palace.

The weeklong festival will also include jazz awareness programs in Nassau County schools and senior centers. “We’re very excited to be expanding the festival into so many multiple events this year,” added DeMerle, whose own performances have been drawing strong notices of late. Indeed, after catching a recent show, Vic DiGenti, music author and former Producer of the Jacksonville Jazz Festival, said, “if there’s anything the talented duo of Les DeMerle and Bonnie Eisele know more about than jazz, it’s how to put on a great show. After years of touring, appearing in jazz festivals and concerts with the likes of Lionel Hampton, Harry James and Manhattan Transfer, they’ve put their talents to work building a successful annual jazz festival for the people of NE Florida.”

Tickets are available for the Ramsey Lewis and Steve March Tormé concerts at the UPS Store, 1417 Sadler Road (next to Publix), 904-277-0820 or the AIFBY Chamber Of Commerce, 8th Street at Parkway, 904-261-3248. Online ticket purchases for all shows and complete event information can be found at www.ameliaislandjazzfestival.com. A non-profit 501(c)3 corporation, the Les DeMerle Amelia Island Jazz Festival distributes proceeds toward a scholarship program to fund college educations for aspiring jazz musicians.