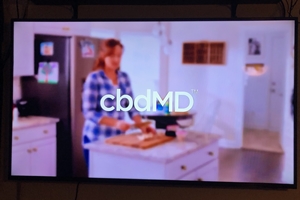 While watching true-life crime stories on the ID network, a sliver of an advertisement, nestled tightly between two other commercials, caught my conspiracy theory mind. I sat straight up in bed! “That was a subliminal message!” I said out loud to no one. I patted around with my open palm and found the remote control in the bed next to me and hit the rewind button.

“Could it be? Oh my gosh!” I didn’t find the ad again right away. I played with the remote’s controls for a minute or two until I successfully paused on the subliminal ad. The image displayed the letters: cbdMD. I was stunned! It was a split second ad for cbdMD. A feeling of excitement rushed over me as if I’d seen the Marlboro Man himself on television. (President Nixon signed the Public Health Cigarette Smoking Act that banned cigarette ads from airing on television and radio back in 1970.)

Common sense took over and I remembered the tales of movie theaters in the 1950’s displaying snippets of buy soda and buy popcorn messages into the previews so you would purchase more food from the lobby. As it turns out, the legend was a myth, but people were still angered by the idea.

See if you can spot the McDonald’s subliminal message in the video:

Then, what else are we being subjected to?